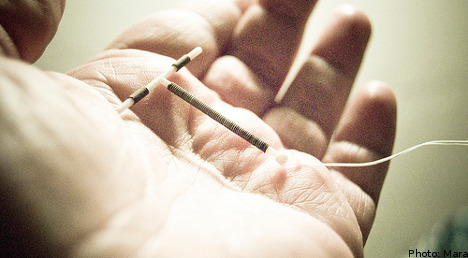 “I decided to get an intra-uterine device (IUD) against unwanted pregnancy in the mid 1980’s,” the anonymous woman told the local paper Östersunds Länstidning.

But after getting the coil in place the woman started to feel bad and she suspected she was pregnant. After a home pregnancy test confirmed that the woman had conceived, she decided to keep the baby.

But a few months into the pregnancy the woman had a miscarriage. She started bleeding heavily and upon arrival to the local hospital she subseqnthly miscarried.

“At the hospital I told the nurses that I had got pregnant despite my IUD, but it was as if they didn’t belive me. When I asked where the coil was now, they said that there was nothng left and that it must have gone down the toilet,” the woman told the paper.

The woman, who thought that was an odd answer, felt as if the staff were making fun of her.

After a few days in the hospital, the woman was discharged and went home.

But in the 25 years that followed she has suffered from recurrent bleeds with pain and “pins and needles” in her back. Despite trying for a baby several times, the woman never conceived again.

Despite seeking medical advice on numerous occasions, it wasn’t until this year that a new midwife decided to make a more rigourous examination.

When test results came back showing no cancer, the midwife sent the woman for an x-ray and after a quarter of a century, the coil was discovered, lodged in the woman’s lower abdomen.

The woman is now reporting the incident to the Medical Responsibility Board (Hälso- och Sjukvårdens Ansvarsnämnd – HSAN). She wants both satisfaction and financial compensation.

“The health services must take their patients more seriously. There is always a reason why you seek medical advice,” she told Östersunds Länstidning.