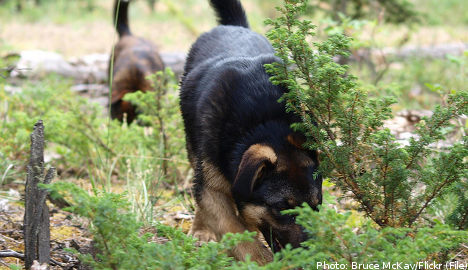 The charges against the man state that in the beginning of June he threatened and physically forced a woman to perform oral sex on him in a Karlskrona park, reported regional newspaper Sydöstran.

The evidence against him is heavy.

On top of a medical certificate testifying to bodily damage, witnesses who’ve spoken with both the victim and the accused, as well as a witness who overheard the act, the prosecutor has one more ace up his sleeve in the form of the sperm-sniffing police dog’s forensic investigation.

The dog found traces of semen at the scene of the crime and after being sent for analysis these were found to match the 23-year-old’s DNA.

Rapports Opus underwent a year’s training in order to reach his exalted position as the sole sperm-sniffing dog of the region.

“He’s the only dog in southern Sweden specialised in tracking sperm,” said B-G Carlsson, the police officer who trained the dog, to Sydöstran.

Carlsson will be testifying in the trial against the 23-year-old. This marks the first time evidence from Rapports Opus sperm-sniffing abilities is used in court, as he only graduated from the dog academy in August 2010.