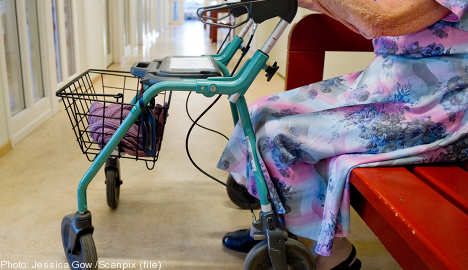 “We have no bruises, footage or recordings to show. One of the nurses has not admitted to any allegations and in many ways it is word against word,” said Eva Abrahamson at the municipality to Folkbladet.

The nursing home in eastern Sweden made the papers following reports in the beginning of July that two assistant nurses were back at work despite the personnel department’s knowledge of their blatant maltreatment of patients.

One patient had her vomit shoved back down her throat, other patients were slapped and pinched. Another woman, 100 years of age at the time, was subjected to her own fist being shoved in her mouth.

The two assistant nurses were originally suspended for a period of three weeks and two months respectively, and then returned to their former positions at the home.

But the slew of complaints received from concerned relatives regarding the reinstated nurses caused local authorities in the municipality to change their minds and remove the nurses from the nursing home again.

However, despite the many reports from the other nursing home staff, and from patients’ relatives, some of which have already reported the matter to the police, local authorities don’t intend to follow suit.

According to Abrahamsson, who has spent three months investigating the case, the Lex Sarah reports against the two nurses hinge on the information received by the nurses’ colleagues.

“Some of the allegations are correct but regarding some things it is really their word against someone else’s,” said Abrahamson to Folkbladet.

However, the paper also reports that the chief prosecutor of the area, Torsten Angervåg, decided last week to open a preliminary investigation into the matter as he suspects a crime may have been committed.

“He will make the call if a crime has been committed or not. Then we will know whether or not we have done the right thing,” said Anette Ödalen, head of care services at the municipality to Folkbladet.

Both nurses are currently suspended from work on full pay while waiting for the municipality to decide whether they will be allowed to return to their old jobs.

Lex Sarah is a law obliging staff in the care industry to report instances of mistreatment to social services. CRIME
One held after explosion in central Stockholm
Url copied to clipboard!