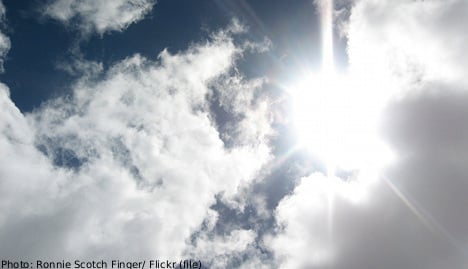 Fredrik Linde, head of forecasts at the Swedish Meteorological and Hydrological Institute (SMHI), told Sveriges Radio (SR) that it is always more difficult to predict the weather during the summer as the cloud build-up is faster and can rapidly produce rain and thunder storms. But this year it has apparently been especially difficult.

“During June and July we have had fairly unstable weather as we have been positioned in a zone between cooler air in the west and warmer in the east. This has meant a lot of thunder and showers and we have found it hard to predict their movements,” said Linde to SR

Earlier this spring, the government unleashed a swell of frustration over inaccurate weather forecasts, and environment minister Andreas Carlgren demanded improvements from meteorologists at the state-owned institute.

Last year every sixth full-day forecast was wrong, well below the agreed rate for good quality.

Meteorologists also missed 33 percent of gale warnings in 2010 compared with 22 percent in 2008.

The state subsequently ruled that at least 85 percent of forecasts in one year must be accurate. Sweden, it was decided, needed better weather.

“Given that we did not reach our goals I have issued a mandate to those who make the forecasts that they actually have to improve the quality,” she said to TT at the time.

So far this year, the institute has been right in 83 percent of their forecasts. Only looking at the summer months the number of accurate forecasts have been a little worse.

But Linde told SR that he believes the institute will have reached the target by the end of the year, despite the accuracy rate actually worsening recently.

“The last two years have seen very cold and snowy winters, which has kept us steadily at 83 percent. Before that we saw a very positive trend for several years but the unstable weather with showers and cold winters have been difficult to forecast,” Linde told SR.

SMHI announced earlier this summer the planned acquisition of a new super computer, named “Byvind”, to replace the old “Bore” system – one of the innovations hoped to enable SMHI to reach their target of accuracy.

According to SMHI IT manager Håkan Borg, the new computer venture is just the first step in the development of a better service from SMHI.

The next phase will entail a cooperation between Swedish weather services and its Norwegian counterpart. According to Borg, they will join forces and pool IT resources to a joint and even more powerful super computer serving the needs of the two countries.

“We are counting on having finished this in 2014 and will then start looking into a possible cooperation with the other Nordic countries,” Borg told trade paper Computer Sweden in July.

SMHI is a government agency under the Ministry of the Environment and offers services such as general forecasts and weather warnings, simulations and analyses, statistics, climate studies and contracted research among others.