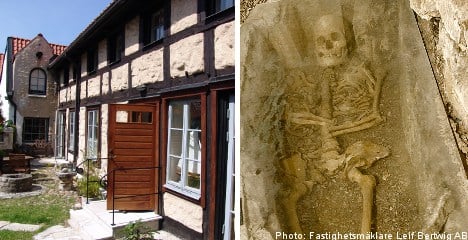 An exposed grave covered with glass and the remains of a medieval Russian church sit idly beneath the five-bedroom property that just came on the market, in Visby, the island’s capital.

“The man is resting in consecrated, sacred ground so his soul definitely rests at peace,” Leif Bertwig, the real estate agent in charge of the sale, told The Local.

Therefore no ghosts are listed in the realtor’s description.

“If any prospective buyers would be worried that he will haunt the house they have nothing to fear,” Bertwig said.

However, according to Bertwig, the buried man probably doesn’t originate from Sweden, but most likely from Russia, as he lies in the remains of an ancient Russian church.

However historically valuable the silent houseguest may be, Bertwig thinks that his underground presence will not affect the final price of the property, with bidding starting at 4.125 million kronor ($652,000).

“It’s definitely not a negative thing, more like a curious detail. Buyers will more likely be attracted to what the house looks like and how it’s built,” said Bertwig.

Bertwig thinks that it is nice that the house has received a lot of attention from Swedish media but pointed out that old medieval ruins are not at all uncommon on the island.

“There are several historical remains of buildings in Visby, and I have come across many during my 33 years as a realtor here,” he said.

The cellar housing the old church ruin and the skeleton are inaccessible from the house itself but are reached through a closed off entrance shared by the four adjoining properties.

Lucky owners of the venerable villa will be able to have their morning coffee in the garden whilst enjoying a chat over their tranquil tenant’s tomb.

“The living room is just above the chancel of the Russian church and the 800-year-old individual resting in a glassed crypt is actually outside the housing unit. He is under the patio,” Bertwig explained.

Evidence uncovered during excavations in the 1970s show that people have lived in the area for at least 4000 years, classifying the discovery as truly historic land worth safeguarding by the state.

To house owners, this means that they can’t change much about the property.

“It is protected, which means you are forbidden to do anything. Residents can’t alter the foundation or change anything below ground as it would be against the law, and visits cannot be made without respect and caution,” said Bertwig.

Though not allowed to interfere with the skeleton’s secluded slumber, Bertwig told The Local that prospective residents are more than welcome to take advantage of the skeleton’s presence by taking in the significance of history below their feet.

“They could bring down a few tables and some chairs if they wish. For those who enjoy history it makes for an exceptional opportunity to get right into the Middle Ages,” Bertwig told The Local.