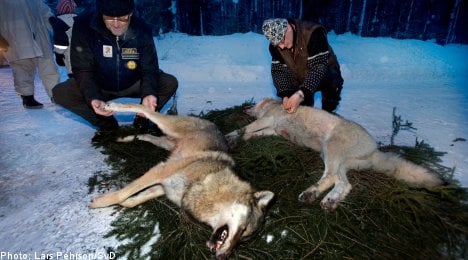 According to minister for the environment Andreas Carlgren the government found themselves with no better option than to halt the hunt this year.

However, the government hopes to resumed the hunt in the winter 2012-2013.

At the same time, the government scrapped the ceiling of 210 wolves, previously set by the Riksdag, that can be culled annually for wildlife management purposes, in order to stop cantankerous carnivores from attacking livestock.

However, according to Carlgren, this does not mean that an unlimited number of wolves will be culled in Sweden.

“Of course not. We will reach a favourable conservation status with as few wolves culled as possible,” he said to news agency TT on Wednesday.

The expanded culling allowance will be based on safety considerations including attacks on livestock or a growing danger to people living in wolf inhabited areas.

The decision also follows a recent report, which showed that illegal poaching accounts for over half of all deaths of Swedish wolves.

The study, carried out by amongst others researchers at the Swedish University for Agricultural Sciences (Sveriges Lantbruksuniversitet – SLU), showed that despite facing an impending prison sentence if caught poaching, there are large numbers of people who wouldn’t hesitate to take a shot at a wolf.

But this is not the only threat to the wolf population of Sweden, which consists solely of descendants to a few migratory Finnish wolves which moved into empty territories left behind when Swedish wolves went extinct in the 1970s, and is highly inbred.

As a result, many of the wolves found in Sweden today suffer from both skeletal abnormalities and reproduction problems.

However, rhe minister couldn’t answer how the new rules will affect the wolf population of Sweden.

He said that the government would present a new target for the wolf population in Sweden next year.

Carlgren stressed that the changes clubbed through by the government are necessary for Sweden to keep the decision-making authority on the Swedish wolf hunt.

A continued struggle with the EU commission on the licensed hunt would have risked being drawn out for several years before being settled, said Carlgren,

He thinks that the commission has acted both rashly and rigidly in its dispute with Sweden regarding the hunt.

According to the minister, policy decisions should be taken as close to the people affected as possible, and therefore he thinks that the commission’s actions in this matter have been unfortunate

“Sweden’s policy on predators must be carried out with great consideration and respect for those that take the consequences of living near predators, that is the local population,” Carlgren told TT.