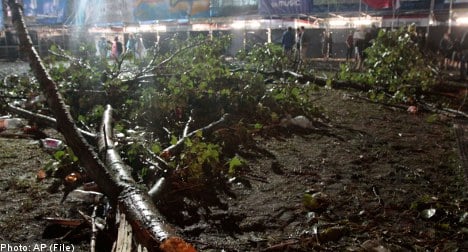 At least five people were killed and dozens injured at the Pukkelpop music festival in Belgium on Thursday night as rain and heavy winds battered festival goers and caused a stage to collapse.

The weather system which spawned the deadly storm is now heading north to Sweden, resulting in Swedish weather agency SMHI issuing a class 1 warning for northern parts of Götaland, Örebro, and Sörmland.

According to forecasters, between 20 and 40 millimetres of rain is expected to fall over parts of southern and central Sweden starting on Friday.

Residents in Gothenburg, which suffered flooding on Monday, may be once again facing the prospect of cellars filled with water and impassable roads.

“This is going to be a similar rain. The determining factor will be whether or not the water manages to run off,” SMHI meteorologist Alexandra Ohlsson told the TT news agency.

“We may expand the warning to other parts of Svealand during the day.”

Starting Friday morning, rain had already swept across southern parts of Götaland and was spreading north to Götaland and Svealand.

Heavy rain and possible thunderstorms were expected to hit Stockholm in the early to mid-afternoon.

By late Friday night and into Saturday, the weather system is expected to weaken as it moves eastward.

According to Ohlsson, there is a chance of sun emerging on Saturday, with a high pressure system expected to move in along Sweden’s west coast.