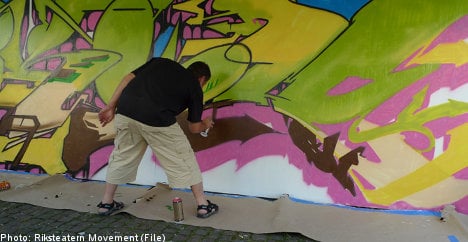 Tucked under bridges, on fences, walls, alleyways and even churches, graffiti is Europe’s great constant. Both cheered as a rebellious, democratic art form and derided as a miserable blight on beautiful cities, graffiti is one thing in Stockholm: mostly, absent.

It’s the result of the city’s “zero tolerance” policy, which forbids any sanction of the style or the culture of graffiti, and which is widely perceived to be the only one of it’s kind in Europe.

The issue was back in focus recently when the the city council refused to include advertisements for graffiti festival “The Art of the Streets”.

“It’s straight up censorship,” Ceylan Holago, the event’s organizer, told The Local on hearing the news. The dispute is another sign of the tension between the city and graffiti writers, she says.

But despite the seemingly draconian approach, Stockholm’s clean walls and scoured trains hide a rich Swedish graffiti culture, a throwback to a time when the official stance was markedly different. The scene gained popularity in the 1980s, inspired by the artists in New York City, and quickly spread across Europe.

The 1980s for graffiti has been described by writers and historians as a golden time. People saw graffiti as “an interesting youth culture”, says Torkel Sjöstrand, editor of the Stockholm-based graffiti magazine UP.

The city had legal walls and commissioned murals, says Jacob Kimvall, a PhD student at the University of Stockholm who specializes in graffiti and curator of the “Art of the Streets”. And a Stockholm style developed, subverting the classic New York City look and using conflicting colours for an “ugly pretty” design, he says.

But by the 1990s, the traffic authorities had had enough. In 1994, the Lugna Gatan (literally: calm streets) meetings between civil servants and real estate authorities ended permission for legal walls. Graffiti buffing and guards became common.

“The graffiti artist’s response was to paint more and faster,” says Kimvall, while those who wished to paint legally left the city. The style developed alongside the crackdown – a fast, simple look replaced the elaborate murals of the 1980s, spreading across Sweden on the back of Stockholm-cool.

A widespread belief also developed among the graffiti world that financial interests were involved. The 2002 arrest of Kjell Hultman, Head of Security at public transport operator SL, on charges of accepting bribes from one of the security companies involved in combating graffiti, did nothing to stem the speculation. Hultman had been one of graffiti’s most vocal opponents.

In 2007, the zero-tolerance policy was passed in city hall, criminalizing all forms of graffiti and murals, as well as installing a “24 hour policy” for removing graffiti. Those caught doing graffiti or other forms of vandalism face fines and possible imprisonment of up to one year. The policy also says that the city will not associate with or condone activities or events related to graffiti in any way – including displaying advertisements for “Art of the Streets”.

While Holago has cited freedom of speech, Stockholm city council has also defended the policy.

“It’s a question of democracy,” says Mats Frej, public relations manager at the city’s traffic administration. “If you don’t like the decision, you have to take this up with the politicians.”

He says the city spends 200 million kronor ($31 million) on graffiti every year – mainly removing it from commuter trains. Security services for combating graffiti come out of another part of the budget. And the city’s mostly-bare walls are a sign of the 24 hour policy; the most successful element, he says.

Torkel Sjöstrand argues that the amount of money spent on removing the paint doesn’t make sense, and graffiti itself – before guards and buffing companies are assigned to it – costs nothing.

“The politics against graffiti are really out of control, after all, it’s only paint on a wall,” he says.

Nevertheless, Frej says the amount of graffiti seems to be dropping. Last year, about 165,000 crimes of graffiti and other vandalism were reported to the police, a decrease of 18 percent from 2009, according to the National Council for Crime Prevention (Brottsförebyggande rådet – Brå).

Despite the decline, graffiti remains a major problem for the city, Frej says, and the police claim that involvement in graffiti can serve as a gateway to other crimes, including drug use. And whether graffiti becomes more popular or less, Frej says the work won’t stop.

“It’s one of our main jobs to make Stockholm nice and tidy.”