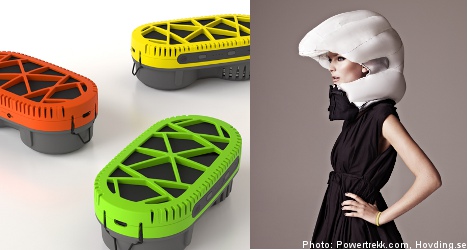 Here is The Local’s summary of ten Swedish technological breakthroughs in the last decade.

Teens and young adults of today have lived and breathed the debate for the majority of their lives – should we or should we not share and download our music online? Laws have been introduced, people have been prosecuted, but the issue of file sharing remains contentious.

Swedish firm Spotify has been heralded in many quarters as having taken a few key steps towards presenting a solution.

Founded in 2006 by entrepreneurs Daniel Ek and Martin Lorentzon, the music streaming platform has over 10 million users. In July 2011, the firm launched in the US market, and tens of thousands of new users came gushing in.

Spotify employs about 300 people and the Dagens Industri business daily estimates the firm’s turnover to be about 2 billion kronor ($311 million) with a stock value of about 15 billion kronor.

The company was bought in 2005 by US auction site eBay for 23 billion kronor, and the platform is now used by private people and companies around the globe.

Skype has up to 30 million simultaneous online users, and in May this year, it was absorbed by Microsoft for a cool 55 billion kronor.

It can detect as little as a sugar cube dissolved in the Baltic Sea. The new technology that researchers around Sweden have been working on for 20 years, is the latest in disease tracing.

Results from HIV samples, that today can take months, can now be ready within weeks, and other tests may go from a day to as little as 15 minutes to yield a result. When diagnoses can be made this much faster, treatment can get started earlier, and more lives can be saved, the firm argues.

It is no news for our imagination, and certainly not for the movie industry. However, on the world armaments market, it is. Swedish vehicle manufacturer Hägglunds has outsmarted the smart, and its latest product in infrared technology is able to trick infra red cameras by redirecting the heat being radiated off a vehicle.

At a recent military exhibition, Hägglunds presented a tank covered with 400 CD sized plates, that make the war machine invisible to an IR-camera. They are now working to provide protection from radars.

Hövding – bicycle helmets for the fair of face

“Ska man va’ fin, får man lida pin’”, according an old Swedish expression, that roughly translates to “It hurts to look nice”. That has unfortunately become true for many bicyclists who have injured themselves due to their lack of helmet.

This discrete inflatable collar, or bicycle airbag if you will, is here to change that. Founded in 2006, the Malmö company Hövding has now secured a venture capital fund of 30 million kronor and their product is set for the European market.

Facebook has seen a gargantuan growth since the Harvard web community left campus.

One of the major recent changes is the website’s advertising, much of which is produced in cooperation with Swedish Keybroker through their service Keybroker Social. The company increased their revenue by 65 percent last year, and is valued at of about 180 million kronor.

A significant speedbump for the breakthrough of solar panels has been the unappealing aesthetics of them. NLAB Solar’s DSC technology can however be built into transparent glass, as thus completely wipe out the dilemma between environmentally friendly, and easy on the eye.

This third generation solar panel, which is also much more receptive to sunlight than older versions, has investors lining up, added to generous grants from the European Union.

Another case of fiction meeting real life, this new technology from The National Board of Forensic Medicine (Rättsmedicinalverket) makes the leap from TV-shows like CSI and Navy CIS and real life.

This new technology developed enables the tracing of chemical changes in the body and reveals information about when damage was caused to a victim of violence.

It feels a little The Matrix like, to pull electricity right out of the air. It is a fantasy made reality with a little device called Powertrekk, by Swedish MyFuelCell.

Unlike solar cells, Powertrekk uses hydrogen and air to generate power, and is therefore completely independent of sun power. Something that might prove very useful in the Swedish climate.

For being a country with as little as a handful hours of sun per week, solar panels are very popular in Sweden. At the recent sun exhibition in Germany, the Swedish company Absolicon Solar Concentrator claimed first prize in one of three categories for their panel that generates both electricity and heat.

The large panel is developed for industrial purposes, and won with the motivation that it is the first product to prioritize heat production, and that it will thus be more profitable than using separate units for electricity and heat.