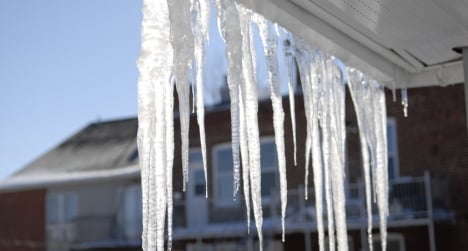 ”It is true that they generally follow each other,” said meteorologist Lisa Frost from the Swedish Meteorological and Hydrological Institute (SMHI) to daily Aftonbladet.

According to experts, the last two winters have been the coldest for the last few decades and statistics from the institute all point to cold winters coming in threes.

”I don’t know why this happens. My personal belief is that it is coincidence,” Frost told the paper.

However, according to the paper, looking at the existing statistics,cold spells seem to last for approximately 3.5 years on average.

The three extremely cold winters 1940-43, during the war, were followed by four very clement winters. Since then, the weather would seem to have followed this 3.5 year pattern.

Despite this, meteorologist Martin Hedberg at forecaster site klart.se agrees with Frost that coincidence probably plays a large part in the weather’s fluctuations between cold and clement winters.

”We are so trained as humans in seeing patterns, that we see them even when it is only coincidence,” Hedberg told Aftonbladet.

However, it is not just statistics that point to another cold winter to follow the last two. Global forecasts are also showing weather activity to indicate that temperatures will be lower than normal this winter season.

”While it is still quite early to make confident winter predictions, an initial analysis suggests that a winter closer to what was observed in 2008-09 might be in the offing. It may not be as severe as the last two winters,” head meteorologist at US forecaster WSI, Todd Crawford, said in a statement.

WSI is forecasting a clement start to the autumn, followed by below average temperatures across the northern hemisphere this winter.

For the time being however, folks in Sweden can look forward to a weekend with summer temperatures in the south and fair weather in many parts of Sweden before unsteady weather reaches the country again next week.