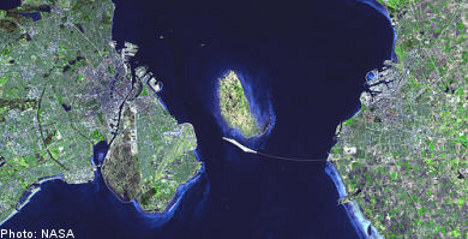 Every morning, Lise* leaves her husband and two small children, crossing the Øresund bridge from Malmö on her way to work. Every evening, she returns: from her home country to her adopted one, where she and her family are legally able to live together.

Due to Denmark’s immigration laws, which have tightened substantially in the past year, Lise was not able to bring her husband, who is from an African country, to Denmark. They chose not to apply for family reunification, she says, choosing instead to live in Sweden for the past three years.

“We could not meet the requirements of the Danish immigration authorities, she says. Because of her husband’s country of birth, “he could not even get a tourist visa to Denmark”.

In Sweden, Lise can live as an EU citizen and her husband was easily granted residency.

“We got family re-unification without any problems,” she says.

Her husband studies at university, and volunteers in a group to help other newcomers. They’ve been happy in Sweden, she says.

“We feel we have been very, very welcomed here, by the immigration system, the medical system, and people on the street. There’s a very different atmosphere in Sweden.”

In 2002, Denmark’s tightened family reunification laws, slated to prevent arranged marriages by immigrants in the country and potential spouses abroad, were introduced. Danes with non-EU spouses have since moved to Sweden, largely Malmö, in droves.

It is impossible to know the exact number of couples living in the city for this reason, says Anders Weström, an expert at the Swedish Migration Board in Malmö. Over 9,000 Danes were known to be living in the city in January 2010, though Danes are not required to register with local authorities, and are not registered as attached to their partners. Many Danes also move to Malmö because of other reasons, including the lower cost of living. But the existence of such couples are well known.

“All we can say,” says Weström, “is at the migration board in Malmö, we have most of these cases.”

Lars Kynau Hansen, the head of the Danish advocacy organization Marriage without Borders, says that with the substantial tightening of the policy in the past year, he expects that the migration of Danes with foreign spouses will continue.

The original policy required both members of the couple to be over 24, along with bank-backed collateral and rules on the use of social services by the Danish spouse.

In November 2010, an immigration and Danish language test was introduced, which a spouse must pass within three months of arrival (immigrants from countries such as the US and Canada are exempt).

The required bank-backed collateral was increased from 63,400 to 100,000 Danish kronor, and the “attachment requirement” was sharpened. This also requires a couple to demonstrate a stronger combined attachment to Denmark than any other country, including visits to the country, the residence of friends or family, and some competency in Danish.

“Somewhat to our surprise, already the changes on November 15th 2010 and January 1st 2011 seem to have had a greatly discouraging effect on possible applicants,” says Hansen, though the effects of the July changes are not yet known.

The number of applicants fell by 45 percent in the first four months of 2011, he says, though last year had the largest number of both applicants and approvals for residency.

The rapid tightening of the policy has often been attributed to the influence of the Dansk Folkeparti (the Danish People’s Party), a far-right party with a strict immigration platform. The party, which is currently the third largest in the Danish parliament, has been accused of leveraging political support for tighter immigration policies, including reviving border controls this summer.

The Danish election, scheduled for September 15th, could change the government from the current Liberal-Conservative coalition. The opposition has pledged to roll back the changes from July, he says, but not those before. As a result, Hansen says the benefits of a new government would be limited for the Malmö couples.

“So you could say that the situation would probably change from extremely bad to not quite so bad,” he says. “But there will still be a steady flow of Danes moving to Sweden because of the Danish rules for family reunification.”

Though they feel welcome in Sweden, Lise says she and her husband would like to move to Denmark before their young children reach school age. It’s difficult for them to cope with four languages, including Swedish, Danish, English, and her husband’s language, she says.

She says she hopes that if a new government is in power, the rules will change. But she’s not holding her breath. Immigrants have become a political issue in the country, and without a personal connection, she says many Danes don’t know what the rules mean for families like hers.

“I don’t think there’s a realization of what it does to people,” she says.

*Not her real name. She and her husband expressed a wish to remain anonymous.