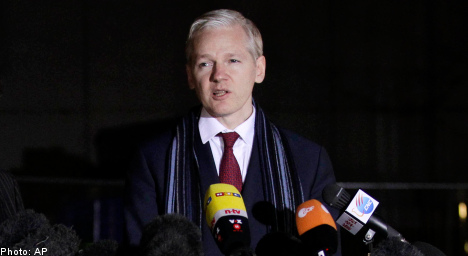 ”I may be a chauvinist pig of some sort but I am no rapist, and only a distorted version of sexual politics could attempt to turn me into one,” says Assange in the book.

In the book, Assange refutes the claims by the two Swedish women that he raped them, saying instead that he had temporary sexual liasions with both spanning several days while in Stockholm.

Assange describes staying at the home of one of the women for several days and says he only hooked up with the second woman when he felt that the encounters with the first were getting too serious.

“My behaviour sounds cold, and no doubt was, which is a failing of mine, but not a crime,” Assange wrote.

In the book he also says that the pressures from America made it especially difficult for him to concentrate on his love-life.

“Although I had spent time with these women, I wasn’t paying enough attention to them, or ringing them back, or able to step out of the zone that came down with all these threats and statements against me in America. One of my mistakes was to expect them to understand this,” Assange wrote.

What happened next, Assange wrote, was a complete surprise to him.

After a few days of peculiar contact with the women, he needed space and checked into a hotel to work on a newspaper column.

Suddenly he saw on Twitter that there was a warrant out for his arrest. At which point his “entire belief system temporarily collapsed”.

“I did not rape those women and cannot imagine anything that happened between us that would make them think so, except malice after the fact, a joint plan to entrap me, or a terrible misunderstanding that was stoked up between them,” Assange wrote in his autobiography.

Initially, Assange touted the autobiography as “one of the unifying documents of our generation”.

“In this highly personal work, I explain our global struggle to force a new relationship between the people and their governments,” he said at the time, according to reports in British media.

But despite initially being on board with the publication, Assange recently pulled out claiming that the book was less of the personal manifesto he had imagined and instead filled with too many personal biographical data about his person, according to British daily The Independent.

The decision came as quite a shock to the small Scottish publishing firm Canongate, who after landing the monumental deal with Assange, had sold on the rights to the book to 38 publishing houses worldwide.

Assange, who was given time to re-work the manuscript, failed to do so, claiming ”all memoir is prostitution”.

But the publishing house, having paid out a six-figure advance on the book to Assange already, decided to go ahead with the publication anyway. The result is what may be the first ever ”unauthorised autobiography”.

Despite the choice to renege on the deal, Assange will be receiving what is expected to be considerably generous royalty cheques as the book starts jumping off the shelves across the world, according to the paper.

“We disagree with Julian’s assessment of the book. We believe it explains both the man and his work, underlining his commitment to the truth. Julian always claimed the book was well written; we agree, and this also encouraged us to make the book available to readers,” publishers Canongate wrote in a note to readers in the beginning of the controversial book.