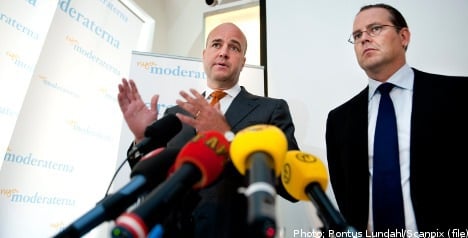 Citing “anonymous sources” the Swedish magazine Vi published the claims that Reinfeldt planned to leave his post before the next election and that finance minister Anders Borg has been lined up as his successor.

”There are no such sources,” he said dismissively to news agency TT regarding the report.

The article in Vi magazine, which comments on Swedish culture and society, was penned by political journalist Anita Kratz claimed that insiders in the Moderate Party are aware of the situation.

”Moderates who are seeing the duo from within, how they work and complement each other, have a clear picture of the situation: Anders Borg will take over, the question is only when,” Kratz wrote in Vi.

Kratz claimed that sources close to the Moderate top have been expecting the shift from Reinfeldt to Borg for some time.

”The announcement of Fredrik’s resignation may come quicker than many have expected,” said one of Kratz’s sources to the magazine.

Borg is however on record as saying that he will not stay in politics forever, that he will feel relief when he leaves his duties, and that he sees his political commitments as a sort of “national service”.

But according to Kratz, his friends in the party aren’t taking these statements seriously. And as late as this summer the party election committee named Borg as one of the candidates when the party chooses new members for the party executive at the conference in October.

”We really don’t believe that Anders has grown tired of politics. He is a thoroughbred politician,” a friend of Borg’s told the magazine.

According to Kratz, her sources have revealed that Reinfeldt has no intention of making the same mistake as former Social Democrat leader Göran Persson, who waited until after the crushing election defeat in 2006 to announce his resignation.

“This is not a person who enjoys taking risks and the sources don’t believe he will do what Göran Persson did, do badly in the election in 2014, and end up a loser,” Kratz said in an interview with the Metro daily.

But Fredrik Reinfeldt emphasised on Thursday evening that he is focused on preparing the party for the next election and brushed aside the magazine’s alleged sources within the party.