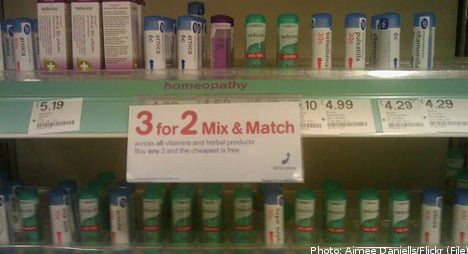 However, the Swedish Medical Association (Läkarförbundet) remain unconvinced by the court’s ruling, and want doctors to state clearly that homeopathic drugs have not been scientifically proven effective.

The controversial debate began when a doctor who recommended a homeopathic cure to a patient was put on probation by the Medical Responsibility Board (Hälso- och sjukvårdens ansvarsnämnd – HSAN).

Now, an indicative court ruling from the Supreme Administrative Court has torn up the probation sentence.

The court ruled instead that the patient was not exposed to any danger, and that the doctor used scientific knowledge when it was necessary, reported Sveriges Radio (SR).

Marie Wedin, chairwoman of the Swedish Medical Association, clarified the association’s stance on the matter to news agency TT:

“We believe treatment should be evidence-based, and evidence has shown that the absolute majority of homeopathic cures have not been proven effective.”

Wedin emphasised that she did not know the details of this particular case, such as the drugs involved, or which other treatment the doctor used parallel to the homeopathic cure.

Occasionally patients themselves wish to try homeopathic cures, and in such cases she suggests that the doctor act as a sounding board that doesn’t necessarily have to say no.

“As long as the doctor is careful to point out that they personally doesn’t put trust in its efficiency, and that there isn’t any evidence to support it,” she said.