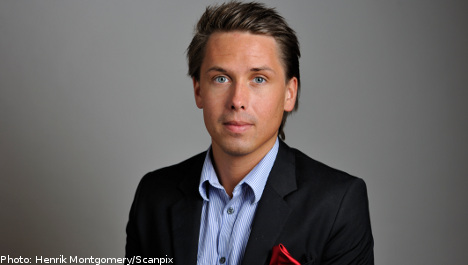 The party has not yet been informed of his decision, according to the Expressen daily, and Petzäll remains listed on the Sweden Democrats’ homepage.

There has been speculation in the media in the past week that Petzäll had fallen out of favour with the party leadership who harboured concerns over his parliamentary performance.

Petzäll was absent from a number of votes in the Riksdag last week without having submitted a request for sick leave.

According to Expressen, the 23-year-old plans to use his seat in the Riksdag to “push my pet issue and increase awareness. To develop more concrete measures to help young alcoholics and drug addicts.”

“I am prepared to talk to all parties in the Riksdag where there is common ground for my pet issue,” he said.

Petzäll was forced to take time out from politics in February after he turned up at a party in Trelleborg drunk, later spending the night in a police jail cell to sober up.

The party was being hosted by his ex-girlfriend and according to a police report Petzäll caused damage in his drunken state.

“What happened is obviously unacceptable. As one of the party’s Riksdag representatives, one must always exercise good judgement,” the Sweden Democrats’ deputy Riksdag group leader Sven-Olof Sällström said in a statement at the time.

After a month out of the Riksdag to deal with his abuse of alcohol and prescription drugs, Petzäll returned pledging to leave politics if he erred again.

Attempts by The Local to reach William Petzäll for a comment have proved unsuccessful.