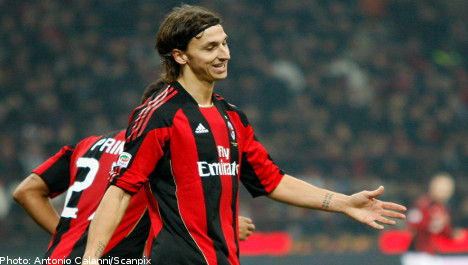 The big Swede had spent two weeks on the sidelines with a groin problem since being ruled out of their opening European encounter against Barcelona, which ended in a 2-2 draw.

Without Ibrahimovic’s return, Milan would be in a state of crisis.

Brazilian forwards Alexandre Pato and Robinho are both injured while attacking midfielder Kevin-Prince Boateng, whom coach Massimiliano Allegri favours in a role behind the front two, is also unavailable.

forward Stefan El Shaarawy, an Italian youth international who has an Egyptian father.

The 18-year-old scored Milan’s equaliser in the 1-1 draw against Udinese and then started in the 1-0 victory over Cesena on Saturday.

Veteran forward Filippo Inzaghi is also working his way back from a cruciate knee ligament injury and has made two brief substitute appearances in the last two games.

However, neither of those two were included in Milan’s 25-man Champions League squad.

It meant that without Ibrahimovic, the club would only be able to call on Antonio Cassano and 18-year-old Simone Andrea Ganz, who has yet to play for the first team and having come through the club’s youth system was only on the Champions League B-list anyway.

Cassano at least has had a run of five games as a starter since the beginning of the season and has played twice for Italy as well, meaning the oft maligned forward has gradually recovered his best form and indeed physical shape.

At the beginning of the season there was a lot of speculation linking the then overweight Cassano with a move away from Milan, but Allegri insisted the club always intended keeping him.

“Cassano is doing very well. People spoke a lot about him in the summer because it seemed as if he would be leaving,” said Allegri.

“However, we’re very happy that he stayed because it was never our intention to sell him.

“We’re taking care of him and he’s repaying us.”

However, with a dearth of attacking options, it will be a relief to Allegri to at least have Ibrahimovic available as a luxury substitute should the need arise.

Although with mid-table Milan travelling to league leaders Juventus at the weekend, Allegri may prefer ideally to hold the Swede back for that crunch clash.

Milan will be expecting to take three points from this game against the group stage debutants, who began their campaign two weeks ago with a 1-1 draw at home to BATE Borisov, leaving all four teams level on one point.

With Sweden set to face Finland in a Helsinki showdown on Friday week and then the Dutch a few days later in Stockholm, Ibrahimovic’s return will be much needed positive news for coach Erik Hamrén.

Sweden are looking for six points from the two matches in the hope of securing a second place berth in Group E, holding out the prospect of automatic qualifying as best second place team.