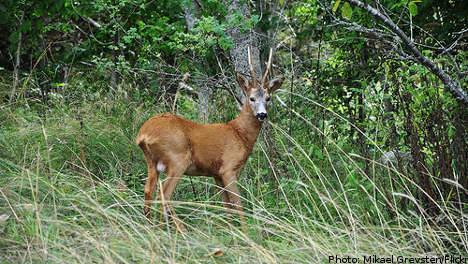 “It was the animal that jumped into me,” he told The Local.

On September 7th, Parmström, known as “Ankan” (literally: the duck), was driving home after receiving the news that hockey star Stefan Liv and the Jaroslavl team had been killed in the Russian plane crash.

It was about 8pm and dusk had fallen over the countryside road he was travelling on.

On the stretch between Malmköping and Eskilstuna, an area rich in game, Parmström suddenly saw a deer pass in front of his car, about 10 metres away.

“My first thought was how very relieved I was that I didn’t hit it,” he said.

It was then that Parmström heard a loud thump at the back of the car on the right side.

“It was a second deer that had jumped over the fence straight into my car,” Parmström said.

After getting out of his car, Parmström found the animal, which had tumbled into a ditch at the side of the road. He is certain that the animal was deceased at the time.

“I looked at it, and it was definitely dead,” he said.

Parmström therefore left it by the wayside and went on his way home.

The next day, when he found out that any wildlife road accident should be reported, Parmström contacted the police.

The police phoned an on-call hunter, and after speaking to Parmström the hunter found the animal lying dead by the road.

But because he waited until the next day to report the incident, Parmström has now been fined over 11,000 kronor ($1,600) for gross negligence.

According to Parmström, he is now considering contesting the decision.

Despite a “good dialogue” with the police after the incident he will now seek legal advice to see whether there is any point pursuing the matter further.

“If an animal jumps into my car, I don’t know if I would call that ‘gross negligence’. I really didn’t know you had to report that. If I had known, I would of course have done it immediately,” Parmström told The Local.