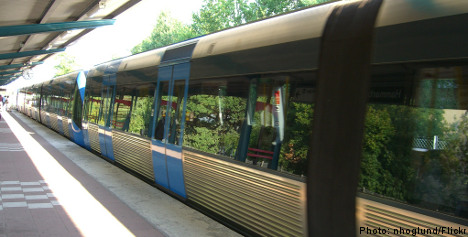 Eira was left at her new day kennel in the southern Stockholm suburb of Hökarängen last Thursday by her owner but struck with home sickness she decided take the matter in her own paws and head out for home.

She evaded her carers and walked the kilometre to the local metro station, ducked the barrier and jumped on a northbound train, according to a report in the Dagens Nyheter daily which has been confirmed both by her owner and the police.

The dog stood patiently among the other morning passengers and waited in the six stops between Hökarängen and her home station of Gullmarsplan – a busy bus, road and metro junction.

But on alighting the train at Gullmarsplan she was met by station staff who took her into their care. The staff report that Eira succumbed to their approach without resistance.

In accordance with routine, the staff called the police and handed Eira over.

“If she hadn’t been detained she would probably have been waiting for me by the door,” her owner, named only as Caroline, told the newspaper.

The only mishap to befall the capable canine is that she is thought to have caught her paw in the door of the metro train, leaving her needing an ice pack.