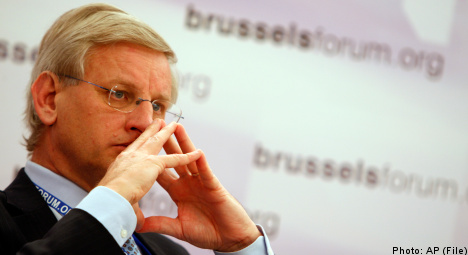 “If there are diplomats who engage in activities in this country that are not compatible with their diplomatic status they are not welcome in Sweden.”

Amnesty International has said it had documented cases of attacks and intimidation against 30 activists in eight countries: Britain, Canada, Chile, France, Germany, Spain, Sweden and the United States.

It urged countries hosting Syrians, such as Sweden and France which have become hubs of opposition activity, to “take stronger action against Syrian embassies accused of orchestrating this kind of harassment and intimidation.”

Amnesty’s Syria researcher Neil Sammonds said Syrians living abroad are becoming increasingly vocal in their support of the growing protest movement back home that has been demanding Assad step down.

“In response the regime appears to have waged a systematic – sometimes violent – campaign to intimidate Syrians overseas into silence,” he said.

Amnesty said protesters outside Syrian embassies are initially filmed or photographed by officials then subjected to harassment, including phone calls,

Some activists say they were directly threatened by embassy officials.

Naima Darwish, who set up a Facebook page to call for protests outside the Syrian embassy in Santiago, Chile, told the rights group she was contacted directly by a senior official who asked to meet her in person.

“He told me that I should not to do such things,” she told Amnesty. “He said I would lose the right to return to Syria if I continued.”

A number of Syrians said their families back home were targeted by security forces, apparently to deter them from their activities overseas.

After Malek Jandali, a 38-year-old pianist, performed at a demonstration in front of the White House in July, his mother and father, aged 66 and 73, were attacked in their home in the central city of Homs and have since fled Syria.

“We look to host governments to act on credible allegations of abuses,” said Sammonds, adding many dissidents were often “too scared of what could happen to them to make formal complaints with the police.”

France meanwhile confirmed that it had launched an investigation after thugs attacked a protest in Paris.

A foreign ministry spokesman said arrests had been made and extra police protection assigned to Syrian opposition protests after the August 26th attack.

“We would not tolerate a foreign state organising acts of violence or intimidation on our territory, and we have made this known in the clearest possible terms to Syria’s ambassador in Paris,” Bernard Valero said.

“The right to protest freely and peacefully in safety is fully guaranteed by the French constitution, and it is also obvious that France supports the Syrian people’s hopes for freedom,” he said.

“An inquiry is under way, and we hope that it will come quickly to a conclusion,” he added.

According to the French daily Le Monde, a small group of Syrian protesters that gathers regularly in a square in central Paris has been insulted, filmed and on at least one occasion violently attacked by thugs.

Valero confirmed that there had been arrests after one such incident on August 26th, but denied a report in the Le Monde that suggested that two of the suspects were carrying Syrian diplomatic papers.