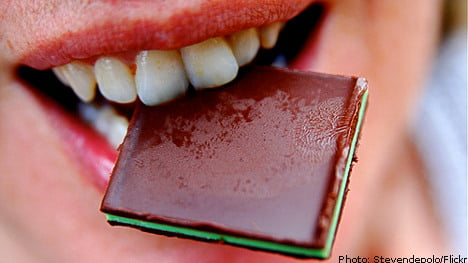 Women who indulge run a significantly lower risk of a stroke than those who refrain, according to the new study carried out by the unit of nutritional epidemiology at Stockholm’s Karolinska Institute and published in the American College of Cardiology medical journal.

“Regular consumption of moderate amounts of chocolate can protect against the onset of a stroke,” said researcher Susanna Larsson to Upsala Nya Tidning.

The study, involving 33,000 Swedish women, gives further support to other smaller studies which have established the favourable health benefits of chocolate.

The women were interviewed in 1999 and their food habits mapped and recorded. Over the ten-year long study the women’s health was monitored and it was established that 1,549 of them had suffered some form of stroke.

The results clearly showed that the risk of suffering a stroke was significantly higher among women who never, or hardly ever, ate chocolate in comparison to those who indulged several times a week.

“The higher the dose of chocolate, the lower the risk for a stroke, it seemed,” Larsson told the newspaper.

For the group of women eating more that 66 grammes of chocolate per week, the risk of having a stroke declined by 20 percent, the study showed.

The health benefits of chocolate have previously been established as having to do with the high content of antioxidants, known as flavonoids.

While dark chocolate, especially brands with high cacao content, are understood to carry greater health benefits, the Swedish women in the study are thought to have consumed around 90 percent milk chocolate.