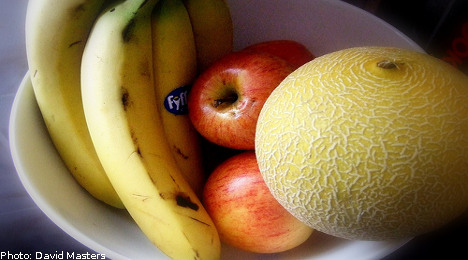 “For us with three children, the total comes up to around 1,140 – 1,710 kronor ($170-255) per academic year,” a parent at the Ramdals school in Oxelösund in eastern Sweden wrote in a complaint sent to the Swedish Schools Inspectorate (Skolinspektionen), the Aftonbladet newspaper reported.

According to Swedish law, school should be free of charge for all children.

Parents have taken exception to requests that they supply the fruit eaten by their children during mid-morning breaks, arguing that the costs of purchasing the fruit constitutes a fee and thus violates the law.

In addition to the cost of buying fruit for their children to take to school, the parents have criticised Ramdals school for asking students to bring their own lunches during once a month nature hikes.

“We make no demand that the children must have fruit with them,” he told Aftonbladet.

The point of having students bring fruit was to allow for them to have a joint fruit break together in class, but the school doesn’t have the funds to purchase the fruit itself.

But following the complaint, the school has opted to scrap the fruit break for students.

“It’s no fun if one child can never have fruit and has to watch when others eat,” Mindemark told the newspaper.

A number of schools around the country have since scrapped fruit breaks due to parental complaints.

In late September, a school in Jönköping in central Sweden stopped encouraging students to bring fruit to school after parents took issue with the practice.

Ingegärd Hilborn, a legal expert at the Schools Inspectorate said at the time that she has previously ruled on several cases regarding fees for class trips, but that she had never been forced to examine the question of whether it was okay to ask parents to send fruit with their children to school.

“The school can ask or urge parents to do so, but it must be voluntary,” she told the TT news agency at the time.