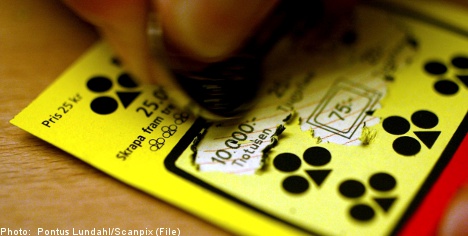 Now she is suing her daughter for the rest of her prize money, according to the local Sydöstran newspaper.

Originally, the mother thought she had won 75 kronor and forgot about the ticket in her purse. But when she took a closer look she noticed the three matching clubs.

She called her daughter to confirm her suspicions that she had won a larger amount.

Upon discovering she hit the Triss lotto jackpot, giving her the opportunity to either claim a 500,000 kronor prize or appear in a live television broadcast with a chance to win a higher amount, the camera-shy mum asked her daughter to go in her place.

Participating in the television jackpot scratch-off gives lottery winners a chance to win a monthly sum of up to 50,000 kronor for a period of 10 to 25 years.

Her daughter oblidged and promptly wrote her own name on the ticket and sent it in to Swedish lottery officials.

During the ensuing television appearance, the daughter ended up winning 10,000 kronor a month for 25 years.

While the daughter transferred the first 10,000 kronor payment to her mother’s account, she has since left her mother empty handed.

Now the mother is taking the daughter to court to get access to the rest of the winnings.

“She plans to retire soon and 10,000 kronor will help contribute greatly to her pension,” lawyer Björn Lindmar told the Aftonbladet newspaper.

Neither the mother or daughter would comment on the case, but according to Lindmar, they had a good relationship before this happened.