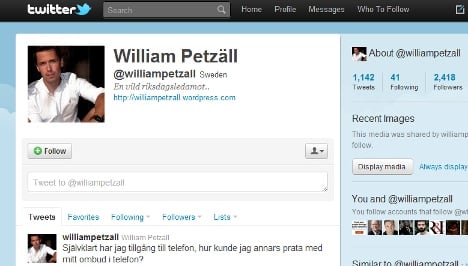 William Petzäll is currently battling the effects of substance abuse after having being involuntarily committed after a recent hospitalization.

The post was followed up by a series of claims including the assertion that Jimmie Åkesson and Björn Söder have had access to everything contained in the email accounts of several reporters at Swedish tabloids Expressen and Aftonbladet.

Petzäll’s lawyer Anna Heurlin later stated that her client had denied that he was behind the Twitter posts and stated that he had neither access to a computer nor a telephone in the secure clinic in which he is housed in Lund in southern Sweden.

Several of the posts contained hash codes which are used to encrypt passwords pertaining to the email accounts of several well-known Swedish journalists.

After having checked the codes and found that the the codes do indeed correspond to passwords used, or previously used, by several of their journalists, the newspaper Expressen has reported the matter to the Security Service (Säpo).

“We have reported the matter to the police regarding the suspected hacking. We have through our own investigation found that several of the details may check out, namely that there has been an intrusion into our computer system,” Expressen editor-in-chief Thomas Mattsson confirmed.

Aftonbladet confirmed as well that they have also filed a police report after verifying the information.

“This is very serious. We found that two of my co-workers’ codes made public on Twitter were correct. But they are old and no longer used, although it is still very worrying that the codes are out there,” said Aftonbladet editor Jan Helin.

The Sweden Democrats have meanwhile denied that they have any involvement in the alleged espionage.

“It is nothing I have ever heard anything about,” said Sweden Democrat MP Kent Ekeroth to Sveriges Radio on Tuesday.

Ekeroth however confirmed information, published on William Petzäll’s Twitter account and circulating in other media this week, that he is behind a new website – Avpixlat (Swedish colloquialism meaning to “reveal” or “unmask”) – which is supportive of the party’s negative line on immigration, the multicultural society and the mainstream media.

“It is my own project,” he said to SR, denying however that party colleagues Linus Bylund and Martin Kinnunen had any involvement in the SD-friendly blog.