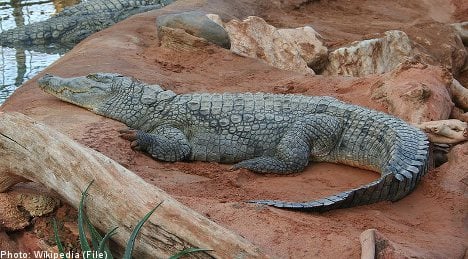 “We can’t put them down, they’re endangered,” Peter Rimo, a lawyer administering the bankruptcy of Zooparken in Charlottenberg in central Sweden, told the Aftonbladet newspaper.

The zoo went bankrupt last summer, and since then Rimo and others have been working hard to place animals at other facilities.

Initially, there was hope that new buyers would step forward and purchase the entire zoo, but earlier this month Rimo gave up hope of finding new owners and has instead focused on figuring out where to move the zoo’s collection of exotic animals.

While Zooparken’s lemurs, flying squirrels, and other animals have been relocated with relative ease, finding new homes for the zoo’s three, 2.5-metre-long crocs has proven to be more difficult.

Part of the challenge, according to Rimo, is the need for a rather large pool to house the animals, which can grow to be up to six metres long.

“The crocodiles are much harder to place. They are large and hard to handle and it’s doubtful they can be placed in Sweden,” he told Sveriges Radio (SR)

As a result, Rimo has now widened the search for new housing for the crocodiles to include Denmark, Germany, and the Netherlands.

Of additional concern is the fact that funding for administering the bankruptcy is running out, meaning the crocodiles will have to be removed from their current facilities soon.

“We’re doing everything we can to find a solution,” Rimo told Aftonbladet.