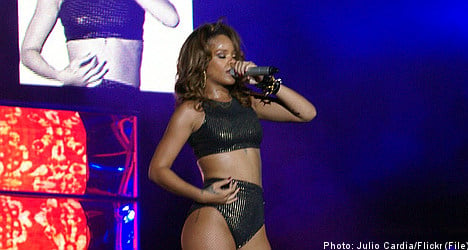 Rihanna performing in Brazil in September 2011

“Unfortunately, we need to report that the concert with Rihanna tonight at the Ericsson Globe has been cancelled due to illness,” concert arrangers Live Nation said in a statement.

“Rihanna is exhausted and sick. Unfortunately we have once again been forced to make a difficult decision at the last minute.”

On Monday, Rihanna canceled a scheduled concert in Malmö after being taken to hospital due to exhaustion.

While she recovered sufficiently to take the stage in Stockholm on Tuesday, by Wednesday her weakened condition once again caught up with her, forcing her to call off her third and final scheduled show in Sweden.

Rihanna had made it to the Ericsson Globe arena on Wednesday afternoon in hopes of being able to follow through with the show.

But about 40 minutes before the concert was set to start, an announcement went out on the arena’s public address system explaining that the concert would be canceled, much to the disappointment of the estimated 13,500 fans.

“We didn’t hear anything until they said it here on stage. This is totally nuts. I’m totally depressed,” fan Hanna Härkönen told the Expressen newspaper.

Kristofer Åkesson of Live Nation told Aftonbladet that the decision to call off the show was taken at the last minute in consultation with doctors.

“We had every indication that the concert would take place up until this happened,” he told the newspaper.

According to Live Nation, Rihanna was “very disappointed and apologizes to all her fans” for the cancellation.

The arrangers added that they are working to find new dates for both the Malmö and Stockholm concerts, but that a decision would likely take “a few days”.