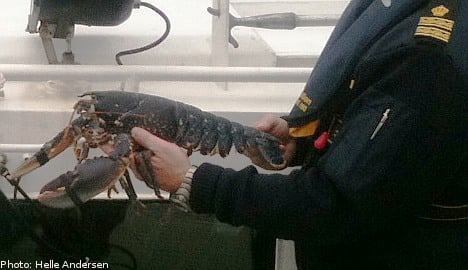 ”The police called us on Thursday morning saying ‘Hello, this is the police. We’re bringing you your blue lobster’,” Maria Jämting, CEO of the Havets Hus aquarium in Lysekil, told The Local.

Jämting received the call after fisherman Reine Andreasson from Strömstad, on the west coast of Sweden, had pulled up a blue lobster a few days ago.

As he hoisted up the catch, he remembered a promise he had made to an employee at the sea life centre, a year or so back.

Andreasson had vowed to donate the next fine-looking blue lobster he found to the centre in Lysekil, some 95 kilometres to the south.

And on Wednesday, he found the perfect specimen.

The question was how to transport the lobster, whom he had named Helga, to the centre.

Luckily for both Andreasson and Helga, the sea unit of the west coast police was in the area, carrying out inspections on nearby boats.

Andreasson approached the officers, asking if it would be possible for them to escort Helga to her new abode, and as the police were heading south on their way back to Gothenburg where they are usually stationed – they were more than happy to help.

Helga, who is reportedly vibrantly blue and measuring almost 30 centimetres, travelled in style with the police, resting in a cardboard box during the journey south.

At Havets Hus they have had blue lobsters in the past but not for a while, so Helga was a welcome addition to the centre’s attractions.

Generally, the creatures at the centre are not given names, but those that have already been named get to keep them.

”We wouldn’t rename Helga, she will definitely keep her name,” promised Jämting.

According to Jämting, Helga has already settled in and seems to be having a whale of a time.

”She is residing with two strapping male lobsters and seems really to be enjoying her new home,” Jämting told The Local.