“”It was terribly difficult, it’s people you care deeply for,” she said to the Aftonbladet newspaper.

Jennie and Thomas, a couple from Sandviken, in northern Sweden, explained on investigative journalism show Uppdrag Granskning earlier in the week how all it took was one call to social services for them to be charged with sexual abuse and have their children taken from them for over two months.

After the story broke big in Swedish media, the woman’s sister, who had made the call to the authorities, approached daily newspaper Aftonbladet, eager to have her part in the story explained.

”There’s more to this than what has previously been told in the media,” she said.

According to the sister, she had become increasingly worried after hearing Jennie mention incidents that sounded inappropriate on more than one occasion.

”I just couldn’t let go of what she told me. It was like a beaker getting fuller and fuller every time. In the end, when Jennie brought it up again during a car journey, it just spilled over,” the sister told the paper.

She told Aftonbladet that she sought counsel from two separate psychiatrists before she phoned the social services.

Both advised her that it sounded as if the family didn’t set appropriate sexual boundaries and that it could be a question of incest.

According to the sister, she he tried to talk to Jennie about it but felt like she wasn’t getting any reponse from her.

”I tried but she didn’t take it seriously.”

Jennies’ sister was surprised, after making the call, to hear that the authorities had taken the children. She also told the paper that she feels like many in the community have turned against her after the events werer made public – something she feels is unfair.

The worst case scenario, she said, is that people will now become afraid of reporting their suspicions to the authorities.

”I love my nieces, but I haven’t seen them in a year,” she told the paper.

Jennie and Thomas have refused to comment on their current relationship with Jennie’s sister. To them, this is matter best left to solve within the family and choose to avoid mud-slinging in the media.

However, in a live debate on Swedish television on Thursday night, Jennie and Thomas had a chance to finally confront the local authorities about what happened and were hoping for an apology for the ordeal that the family was forced to endure for a year.

However, the representatives for the local authority refused to apologize.

”It is always unfortunate when these things occur and there is always someone who is hurt. We have legislation which prioritizes what is best for the children, and sometimes, sadly, this means that adults are affected. It is unfortunate and tragic,” said Renate Almén of the Sandviken municipality.

Almén didn’t agree that the children had suffered from what had happened and was not prepared to offer the couple the apology they were after.

”If we make a mistake we rectify it. Why should we apologize for following Swedish legislation?” she said on the show.

However, after the show, local politicians and civil servants in Sandviken have received death threats via the municipality web page.

”We are taking these very seriously,” said municipality head Ann-Katrin Sundelius to TV4. 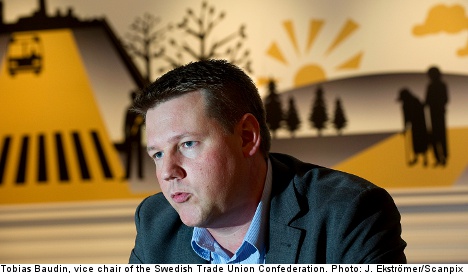 “Working for the public good and limiting how much profit is taken out should be fundamental principles,” LO vice-chair Tobias Baudin and leaders in 14 of its member unions wrote in an op-ed published on Tuesday in the Dagens Nyheter (DN) newspaper.

In order to implement the profit cap, the authors suggest creating a new type of company which they dub samhällsbolag (‘community companies’).

The new companies would be based on a corporate structure that includes conditions closely tying profits to interest current rates.

Currently, there are about 50 such companies, referred to as SVB firms, an abbreviation stemming from särskild vinstutdelningsbegränsning (special profit limitations’), the Swedish term describing their built-in cap on profits.

In October, a parliamentary motion submitted by members of the Green Party also referenced SVB companies as a potential solution to the debate regarding profits in the welfare sector.

The union representatives also proposed a new council or state agency with the mandate to survey activities in the welfare sector.

“Tax money meant to finance the citizens’ schools, health care and social services are ending up in private pockets,” they wrote.

“Nowadays, it is completely permissible to allow private companies to make a profit at the expense of welfare quality.”

Creating a new type of company based on the SVB form proved unpopular with private welfare providers.

“There are two things in the LO proposal that both surprise and upset me. Firstly, the model they propose has already been tested but today there are no welfare providers run in that manner,” Håkan Tenelius at the Association of Private Care Providers (Vårdföretagarna), which represents employers, told the TT news agency.

“In practice, it is impossible to run a business in the long term with that type of model.”

He also thinks the profit-cap means tax payers will have to invest more than they do today as a reform would scare off potential investors.

“It would hamper new investments which are sorely needed. Who, apart from the tax payers, would want to pump in more cash to run a business that is so forcefully restricted?” Tenelius asked.

Political reactions to the proposal, which would reverse some aspect of the centre-right government health care and social services reforms, were mixed.

“It falls in line with what we have proposed,” noted Left Party leader Jonas Sjöstedt.

He classified the LO idea as more forceful than proposed reforms from the Social Democrats, who are the government’s main opposition in parliament and have historically been allied to the union movement.

“It’s quite a big difference in that LO wants to remove the profit aspect, it’s a much sharper proposal than the one from the Social Democrats,” Left Party leader Sjöstedt told TT.

The LO proposal, however, immediately faced flack from business associations.

“It is highly regrettable that LO chooses a regulation line that gets in the way of business and risks leading to job losses,” Urban Bäckström, CEO of the Confederation of Swedish Enterprise (Svenskt Näringsliv), said in a statement.

It branded the LO proposal “an attack on business”.

“More than 10,0000 private companies and 100,000 employees could be affected be the proposals that LO have put forward.”