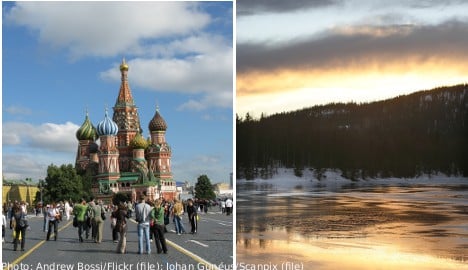 ”I think it is very positive for Sorsele. We have been placed on the Russian map. There’s been a show about us and our idea on Russian television. Any publicity is good for us,” said the local council head Göran Wikström to Sveriges Television (SVT).

The enormous success of the drive so far has lead to nearby municipalities Malå, Storuman, Vilhelmina, Dorotea, Åsele, Norsjö and Lycksele to follow suit, according to SVT.

As The Local reported in 2010, within the next five or six years, over 350 locally employed public sector employees will retire from Sorsele municipality, in the county of Västerbotten.

That’s 30 percent of their workforce and it was feared that Sorsele wouldn’t be able to find anyone to fill the positions.

The local authorities therefore decided to market themselves to their Russian neighbours, with the aim of boosting dwindling population figures and to ensure an influx of foreign labour.

However, there is no guarantee that the job openings will be filled by the Russians. According to Wikström, they will be competing about the jobs with everyone else.

As part of the project, which will cost about six million kronor ($891,000), the idea is that the Russians would learn Swedish before their arrival to Sweden.

The council is hoping for funding from the EU. According to them, there’s plenty of housing but fewer jobs.

So far, the council reports a massive interest.

And according to the local authorities, among the 900 applicants are doctors, teachers, veterinary surgeons and engineers.

Despite one aim of the project being boosting population figures, Wikström told SVT that it isn’t necessarily women of child bearing age that they especially welcome.

”Absolutely not. We want whole families with children as every community need young people,” said Wikström to SVT.

However, local authorities stressed that money from the EU is essential to make the project work.

The first Russians could then be arriving in the county of Västerbotten in a year’s time.