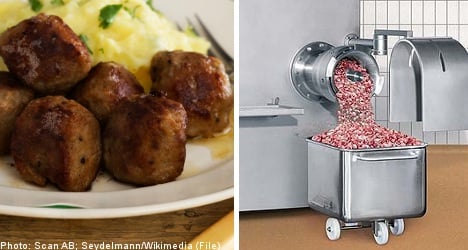 The accident occurred at 7am on Tuesday morning at a plant in Skara operated by Scan, after a 60-year-old employee tried an unorthodox approach to clear a jammed meat grinder.

“First, he was forced to open the machine several times, which has a safety mechanism that causes it to stop automatically,” Scan spokeswoman Margareta Thorgren told The Local.

Despite repeatedly sticking his arm down in the grinder to clean the machine, the 60-year-old man, who has worked at the plant since 1997, found that the machine still jammed upon restarting.

“He then attempted a maneuver whereby he left the machine running and then stuck his hand up inside from the bottom, at which point his hand became caught in the machine and he injured his fingers,” said Thorgren.

The man was immediately taken to hospital where he was being treated for his injuries, but Thorgren was unable to confirm the extent to which the man’s hand had been damaged.

“This is an extremely unfortunate incident,” she said.

“Luckily, it doesn’t happen that often.”

In the meantime, the meatball processing line remains idle pending an investigation into the accident.

The plant’s workplace safety officer, as well as officials from Sweden’s Work Environment Authority (Arbetsmiljöverket) will be on hand later on Tuesday to look into what caused the machine to jam in the first place.

“At this point we don’t know what happened,” said Thorgren.

“Everything will be carefully reviewed. It appears that the man’s injuries were caused by a deviation from standard procedures, but we nevertheless take the incident very seriously.”

Founded in 1899, Scan AB is one of Sweden’s largest producers of meat products including meatballs, sausages, bacon and a range of other products.

Since 1970, the Scan brand has been used by all of Sweden’s slaughterhouse cooperatives.

Today, the company is a part of HKScan and operates processing facilities in Skara, Örebro, Kristianstad, and Linköping.