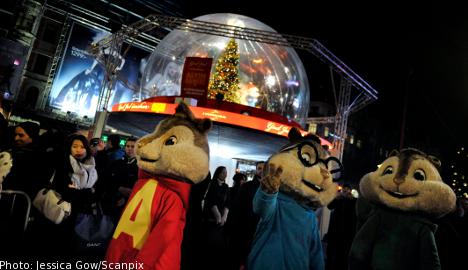 ”They had a permit for a tree and four Santas. The chipmunks will be gone before the end of the week,” said Per Anders Hedkvist of the Traffic division at Stockholm City Council to daily Dagens Nyheter (DN) on Tuesday.

The unveiling of this year’s Christmas lights had been planned as a large scale affair, with a choir singing and speeches held near Svampen, on Stureplan, in the posh Stockholm district of Östermalm.

However, the central display, which was placed on top of the mushroom-like concrete structure that gives the area its name, soon came in for criticism from those who expected Christmas decorations rather than advertising for an American children’s film soon to première in Sweden.

”I thought I was witnessing something historical. But all I feel is used and dirty,” said disgruntled onlooker Anna to DN.

The city councillor who did the unveiling of the display was also shocked to be met with giant rodents instead of the more traditional display that she was expecting.

”I was very surprised at the unveiling of the display, because in the application it was described as Christmas decorations,” Ulla Hamilton, city councillor for traffic told trade paper Resumé.

”This was not at all in line with the permits we had issued,” Hamilton told the paper.

After a meeting between the Stockholm City council Traffic division and the organization City i Samverkan (City in Cooperation), responsible for the planning of Christmas lights and decorations around the city, on Tuesday afternoon, they agreed that the organization had no permit for the Alvin display.

It is not clear how wires were crossed between the city and the organization. However, according to the city council, councillors were aware that the organization was working with sponsors, but not of the final plans devised for Svampen.

”City i Samverkan has not been able to give me a clear picture of how it all got away from them in the end, but they were the first to express regret that something had gone wrong,” said Hedkvist.

However, he said that the organization is an important partner for the city.

”We’ll put it behind us and continue onwards, as soon as the chipmunks are gone,” Hedkvist told DN.

The Local’s attempts to reach City i Samverkan’s CEO Per Eriksson have so far been unsuccessful.