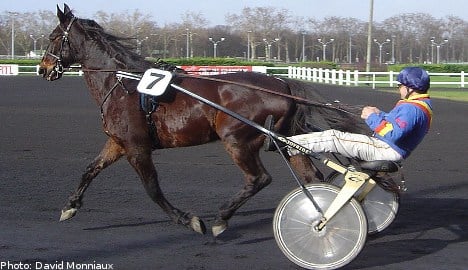 To many a newcomer in Sweden, the strange feeling of not being able to ”get” trotting (harness racing) is similar to that of being the only one in the pub who isn’t in on the joke but realising it must be funny, because everyone else is laughing.

Walk into any sports pub in Sweden and it is likely you will see someone staring up at a TV screen on the wall uttering in English, ”Why don’t they just run properly?” Or something along those lines, as they consume a sport that is as deep rooted in Swedish society as football is to a Brit, or hockey to an American. The question remains though. Why?

After all this is a sport every Swede seems to know at least something about, and, even if they don’t actively participate, most still seem to have a soft spot for it, hence the entire TV channel dedicated to it, as well as prime slots on terrestrial stations.

To the uninitiated, trotting is horse racing, only with a driver in the carriage behind.

The tracks, 33 of them dotted all over the country, are testament to the popularity and the provincial nature of the sport and constitute one of the key reasons for trotting’s popularity, according to TV expert commentator Peter Andersson, a man more than happy to be labelled a ”trotting nerd”.

”Most of the tracks were built in the 70s, they are not just in big cities and they all have good facilities, making it a very comfortable pleasant day out for the family. Very civilised, very Swedish,” he smiles.

One theory about its popularity is that the racing, at what could be described as a leisurely pace, always with a sense of control and where tactics and methodology outweigh the more primitive hell-for-leather attitude of flat racing, reflects Swedes in some way. Gladiatorial it is not.

There are many theories about how it came to be a sport in the first place, but in Sweden it is generally accepted that the origins lay in the forests up north. The forestry workers cutting down the trees would then transport them on horse driven carts and race each in the process.

As this became more popular, the Swedes, ever happy to place a bet, morphed it from humble beginnings in the 1800s into a sport that is worth millions today, not least to the treasury department who take a share of the action as part of the state betting monopoly.

Of course the money aspect drives the sport as much as anything else, and it taps into the Swedish hunger for betting but with decent odds of winning, especially on the V75 weekly selection of seven races. Even when it comes to betting there is still something very “lagom” about placing money on trotting.

”I think the key thing with its popularity is that people love to bet, and with trotting, more than other forms of racing, or the lottery, you actually have quite a good chance of winning,” says Andersson.

Trotting has always been much more of a regional sport than in the cities, although the largest and most famous course is Solvalla in Stockholm, home to the biggest event on the calendar each year, Elitloppet, worth some two million kronor to the winner.

The race, one of the biggest of its kind in the world has been contested since 1952. It was also at the centre of the sport’s biggest scandal in 2006 when the best horse in the world at the time, the French trained Jag de Bellouet was disqualified having won the race after testing positive for a banned substance. Worse still, the runner up that day also tested positive.

The rules and checks have been tightened up considerably says Andersson, but the saga was still a major blow to the sport. The Elitloppet is also proof of what an international sport trotting has become. While Sweden is by far the biggest of the Nordic countries, France, Italy, the US and Canada also have regular meetings and a strong following.

If you do fancy a flutter, this weekend could be as good as any to dip your toe in the water, as the last of the year’s big races takes place at the Jägersro track in Malmö.

It’s a genuine slice of Swedish life, you could end up richer, and maybe even feel that you get the “joke” after all.