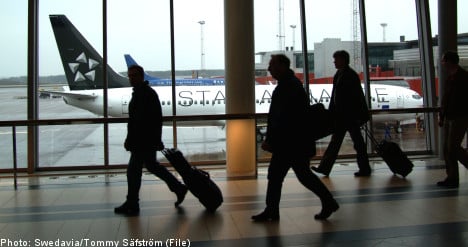 Security checkpoints at Sweden’s largest airport received a failing grade in the recent test carried out by Securitas, the firm responsible for managing Arlanda’s security checks.

A fake bomb, planted in hand luggage, passed through security checkpoints more than ten times, according to Securitas staff who spoke with the Dagens Nyheter (DN) newspaper on the condition of remaining anonymous.

Only security personnel in Arlanda’s terminal 4 managed to discover the device – and were offered movie tickets as a reward.

“I don’t feel at all safe when I fly from Arlanda,” a Securitas security checkpoint worker told the newspaper.

The securitas personnel explained that, throughout the autumn, a number of improvised explosive device (IED) tests had been carried out at Arlanda, whereby test subjects attempted to pass through security with a fake bomb placed in their carry-on luggage.

“I think it was what we call a ‘Donald Duck bomb’, one with simple construction and easy to discover,” one employee told DN.

“They only think about money, not security,” a Securitas employee said.

According to an internal memo reviewed by DN, Securitas is in the middle of a procurement bid with Swedavia, the company that manages operations at Arlanda and other Swedish airports.

“We need to show Swedavia that we’re capable of meeting their requirements now!” the memo said.

However, Mats Paulsson, who oversees security at the airport, told DN that security at Arlanda meets accepted standards and that passengers have no need to worry.

“We believe that we have a totally acceptable level of security. It’s something we’ve put in place through a dialogue with police and the National Transport Agency (Transportstyrelsen),” he said.

Ludmilla Bjerke, head of security for Securitas Aviation, refused to comment on the fact that several employees failed to discover the fake bombs.

“We are continually performing tests. For obvious reasons, I can’t comment on security matters at the airport,” Bjerke told DN.