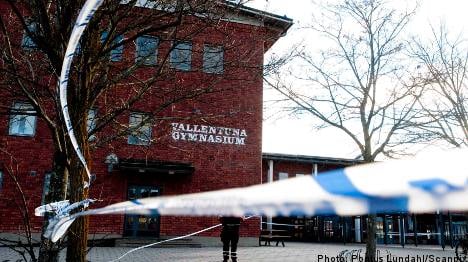 The victim is reportedly 17-years-old and a student at the high school. Eye witnesses to the incident say that he was lying on the ground, following the attack.

”I was on my way to school when I saw a guy in a dark coat and a mask by the entrance. He stabbed a guy several times in the back,” one witness told daily Aftonbladet.

“A few of us were standing around him. He was lying on his back and his friends tried speaking to him, but he wouldn’t answer and he was shaking,” another said.

The area was cordoned off by the officers and a police helicopter also circled the perimeter during the morning.

Police said that a forensic team begun their investigation of the site soon after the police had arrived on the scene.

According to daily Expressen, several of the school children tweeted that they were not allowed outside of the school for safety reasons and a nearby pre-school has also been advised to keep the children indoors.

”We aren’t allowing anyone out in the playground as a safety precaution,” said pre-school head Christer Westerlund to news agency TT.

The other students at the high school are said to be safe.

”Yes, absolutely. We have gathered the crisis team and we will be informing the students in a short while,” said Anki Wallerå of the school to TT during the early afternoon.

According to Sven-Erik Olsson at the county police, a preliminary investigation into attempted murder has been initiated and the perpetrator is believed to be a young man.

According to press spokesperson Anders Gillander, the attack seems to have been aimed directly at the targeted boy.

“It seems more as if they lay in waiting for a specific person to arrive than jumping the first person they saw,” he said to News agency TT.

During the afternoon two young men in their twenties were called in for questioning.

According to Aftonbladet, they were suspected to be involved in the incident, although police said that there were no clear indications that they were responsible for the deed.

One man was later arrested while the other was released. The arrested man is in his twenties and not a student at the school, according to Gillander.

Police found a balaclava in the nearby area, believed to have been used by the perpetrator.

”We haven’t found the weapon, but it is some sort of implement,” Olsson said to TT.

According to the paper, the knifing occurred on school grounds but not inside the school itself.

The injured boy was taken to hospital and his condition is believed to be serious.

According to Aftonbladet, he has suffered a puncture to one of his lungs.

Gillander later confirmed that the 17-year-old was stabbed in the back.

“He’s had surgery and has been anaesthetized until tomorrow,” said Gillander, who couldn’t confirm whether the boy’s injuries were life threatening or not.