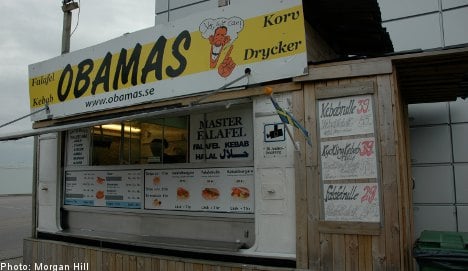 “Obamas” – written without an apostrophe in accordance with Swedish grammatical custom – serves falafel, kebab and sausages, prepared and served by Amro and Soumia Hawary, who opened up shop almost three years ago.

“I named it Obamas because I really like the American president Obama,” said owner Amro Hawary to The Local.

“I have followed his career since he was in Chicago, a few years before he was president.”

You can’t see Obamas from the main road and there is not a lot of traffic flow to help you find your way. But, thankfully, there is a giant Obama head on a “Falafel, kebab and sausage” sign on the main road, directing the way to the little cart.

The owners of Obamas are Amro and Soumia Hawary, from Egypt and Morocco respectively. The pair started selling food from the cart three years ago, shortly after Mrs. Hawary moved to Sweden.

“She was having trouble finding a job here in Sweden. And she enjoys cooking. So we decided to start the food cart,” said Amro Hawary.

The little town of Kävlinge is a bit out of the way even for Skåne, the southern part of Sweden made up of a combination of farmland and small towns.

The big draw to the area has always been the Center Syd shopping centre, a typical Swedish mall with the usual assortment of shops and a few extras with a more local feel.

However, lately the mall has fallen on hard times as other larger towns have built newer shopping centers.

But hope is in the air.

Not only is Center Syd working on extensive refurbishments, but it is also the home of the little food cart, which insists that ‘Yes, we can.’

Despite it being Soumia Hawary who does the cooking, her husband also helps out at the stand, when he isn’t busy working with other projects.

Amro Hawary is also an artist, responsible for the Obama drawings on the cart and the street sign.

“If we had children he would name our son Obama, and our daughter, she would be Michelle.”

Mr. Hawary grew up in Egypt, but says he has always had close American friends.

He spent some time in the US in the 1960s, and has been following American politics ever since. He was surprised when Obama was elected president, but happily so.

So far, the name Obamas seems to have been a great marketing strategy.

The Hawarys say they get a lot of foot traffic based on the name, and many people stop to take pictures, both Americans and Swedes.

As it is a bit off the beaten track, the tourist draw is not huge, but plenty of Americans who live nearby know about and visit Obamas, the Hawarys say.

“Customers also remember the name and recommend it to their friends,” says Amro Hawary.

Obamas serves an array of falafel, kebab and sausages prepared by Soumia Hawary.

“In Morocco we make the falafel from potatoes, not chickpeas, but the seasoning is the same,” she said as she prepared a falafel roll for a customer.

“These are made from chickpeas, like they are here in Sweden.”

On a recent weekday, the cold and gray weather didn’t keep several people from lining up for an Obamas lunch.

Interestingly, most of them don’t seem to reflect upon the sausage stand’s name.

Lately business has been slow, due to closed stores and the construction works in the area, but the Hawarys are confident the future of Obamas is bright.

According to Mrs. Hawary there are plans for new shops to move into the neighboring building, which is likely bring more car traffic to the area and more customers.

The Hawarys are banking on 2012 being a good year for both president Obama and the Obamas food cart, behind the shopping centre, in a little town in the south of Sweden. 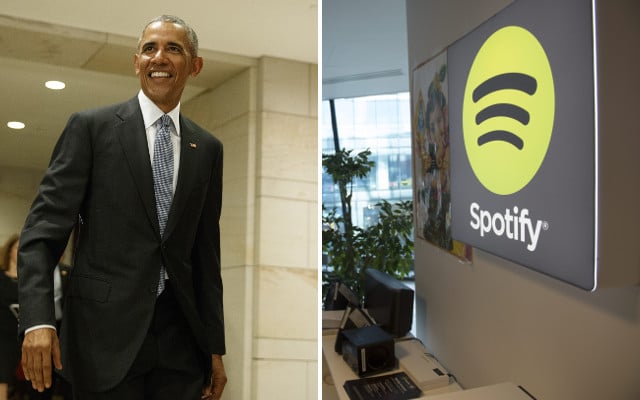