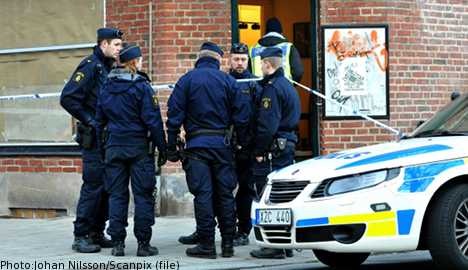 “There were a lot of shootings during the latter part of 2011. It is a tough situation right now,” said Hans Nilsson of the Skåne county police to daily Svenska Dagbladet (SvD).

The 15-year-old was found shot half past midnight, in the midst of New Year’s revellers. Everything is pointing to him being gunned down in cold blood on an open street, while the bangs from the fireworks masked the sound of the gun.

“At first I thought he was drunk, but as I approached him I saw all the blood,” said the person who found him to daily Aftonbladet.

So far the police are flummoxed as to why the boy was targeted. He has no previous criminal record and is described by those in the neighbourhood as “an ordinary guy” who was into sports and very fond of his family.

“Everyone is talking about it and no one can understand. He was a funny and nice guy, he was full of jokes and almost always happy,” said a school friend to Aftonbladet.

So far no one has been brought in under suspicion of being behind the attack, although police have questioned many who were in the area at the time.

With two previous fatal shootings at the end of December to investigate, Malmö police describe the situation as “strained”.

On the day after Christmas, a man was shot dead while playing cards on club premises and just two days before that, a workman was shot while renovating a café in a central part of the city.

During 2011 there have been about 30 shootings and six gang related murders in Malmö, according to local paper Skånska Dagbladet.

The two last incidents in December has made the Swedish National Bureau of Investigation (Rikskriminalen) send some ten officers to aid the Malmö police in their investigations.

Hans Nilsson told SvD that a lot of weapons on the streets in combination with outdated weapons laws have contributed to the recent escalation of serious violence.

“There is quite a large number of incidents in Sweden related to organized crime and the legislation, which dates from the 1940s and 1950s, isn’t really up to date with the reality we are facing today,” he told the paper.

According to Nilsson, most other countries have more severe regulations on weapons than Sweden today.