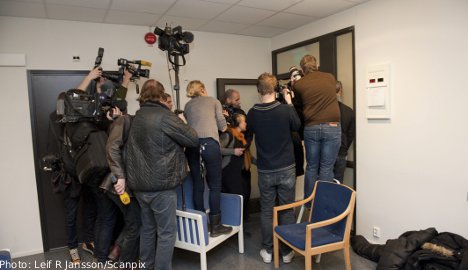 Press gathering at the remand hearing of the apprehanded couple in Uppsala.

”I saw at least four police officers and someone in a white suit with an automatic weapon. And I thought ‘What are they doing here?’,” said 40-year-old local Jens Enkvist, who witnessed the incident, to daily Aftonbladet.

The kidnapped man reportedly had minor injuries and was taken to hospital but police said that he was ”doing well under the circumstances”.

The building where the man was found is owned by a 26-year-old man, who had purchased it a mere ten days before the suspected abduction. To the vendor the man had said that he was an artist and that he would use the house as a studio.

”He seemed totally with it and very bright,” said previous owner Gösta Dahlström to daily Expressen.

However, Dahlqvist never actually met the man. The deal was struck over the phone and through the post. The money was paid in two instalments. Half was paid by the buyer and the other was deposited the day after by a woman, claiming to be the buyer’s girlfriend.

On Tuesday, a 26-year-old man and a 23-year-old woman were brought in by police for questioning after being stopped in their car outside Uppsala. When searching their vehicle, police found things belonging to the missing man.

In conjunction with the man’s discovery, police apprehended a third man.. It is not confirmed if this is the owner of the house where the missing man was held.

The third suspect was formally arrested on Thursday morning, on suspicion of abduction between December 28th and January 4th.

On Thursday, the couple’s remand hearing is being behind locked doors, due to the sensitive stage of the police investigation.

So far, the woman has been remanded into custody pending trial.

According to daily Aftonbladet, the woman looked composed though shaken as she announced that she denied all allegations of involvement in the disappearance of the 25-year-old.

She had entered the hearing with a blanket over her head to avoid the gathered press.

The man reportedly seemed more at ease and smiled and nodded to the press before his hearing began. He also denied the allegations.