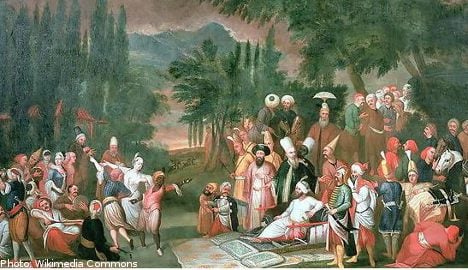 Östlund, from the Department of History at Lund University, found that Sweden had an active role in the 18th century slave-trades through the discovery of forgotten ship registration documents stored in Stockholm’s consulate archives.

While ‘not surprised’ about uncovering Sweden’s participation in the Ottoman Empire, he stresses the importance of shedding light on Sweden’s role in the affair.

“Sweden actively participated in the Ottoman Empire slave trade with the Sub-Sahara – and this is completely new,” he said.

According to Östlund’s findings, the shipping registries state that the Swedish ships’ cargo was “negroes”.

While the slaves sent to America were predominantly men used for plantation work, the Ottoman Empire had a different agenda entirely.

“Up to 75 percent of the passengers on board were women,” said Östlund.

“These women were used as servants and concubines, often both at the same time. They lived a relatively short time, research suggests an average of seven years after reaching the Empire, and this kept the slave trade between Africa and Tripoli going strong.”

The only other alternative for freedom was marriage, and this, too, reduced slave numbers – prompting an increase in demand.

Sweden had consuls in Tripoli in 1741, creating a peace agreement between the countries

According to Östlund, Sweden also had peace agreements with other states in the region meaning Swedish ships had extra leeway in international waters and used this to sail the Mediterranean uninterrupted.

Östlund’s findings have created a heated discussion, and not everyone is taking the news well. While people have accused him of trying to drag Sweden’s history through the mud, Östlund explains that it was simply curiosity that motivated his research.

“We can’t always have this idea that Sweden is just a happy land in the North, isolated from the rest the world,” he told The Local.

Östlund’s book on the findings,Sweden and North Africa: Slavery and Diplomacy in the Mediterranean World, circa 1650-1760, will be released in 2013.