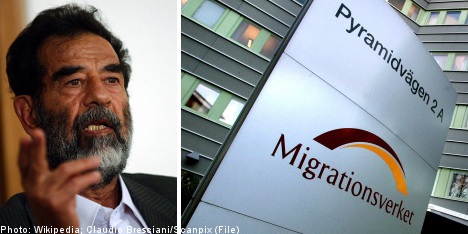 The man, who has worked at the agency for 30 years, is also under investigation for physically assaulting a female colleague and making derogatory remarks about a woman wearing a headscarf.

The comparison of the baby to the former Iraqi dictator came during an interview conducted last year between the employee and an asylum seeking couple from Iraq who brought their newborn infant along to the meeting.

“Who do you think he looks like?” one of the proud parents asked the Migration Board employee.

On a separate occasion, the man stood in a customer service reception area and glared at a woman wearing a headscarf.

After one his colleagues had assisted the veil-wearing woman, the man went up and asked his co-worker, “How does it feel to talk to ‘one of those’?”

The shocked co-worker, who had also been told by the man about his exchange with the Iraqi asylum seekers, decided to inform their supervisor about both incidents.

A few days after the female colleague reported the man, he deliberately pushed her twice within the span of a few minutes when he passed her in the hallway, while other surprised Migration Board employees looked on.

During a subsequent conversation with his supervisor, the man did admit to pushing his colleague and to comparing the asylum seekers’ baby to Saddam Hussein.

He added, however, that the comparison was meant as a joke which he had quickly realized was inappropriate.

The man also admitted to his comments about the woman wearing a headscarf, going on to say that he didn’t think it was appropriate for women to wear veils when conducting business with public authorities.

According to the report filed with the disciplinary committee, the man’s supervisor has had numerous conversations with him since 2007 about his behaviour toward colleagues and asylum seekers.

“The incidents described above show, according to the judgement of the section head, that the reprimands have had no effect,” the section head wrote in his report, adding that “under no circumstances can violent behaviour and the like be tolerated in the workplace”.

In the wake of the incidents, the man has been transferred to a role in which he has no contact with the public pending a ruling from the Migration Board’s disciplinary committee on possible disciplinary measures.