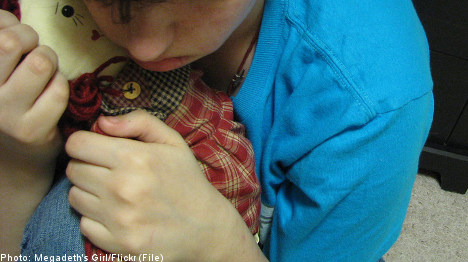 The incident took place in an apartment in Lund, southern Sweden, last December, according to local paper Skånska Dagbladet.

The father, who had brought the kids home from their sports activities, saw red when his 8-year-old daughter sat down on the floor in the hall of their flat after complaining of needing to pee on the way home.

He then hit her over the head with a shoe, shocking his wife who witnessed the event and immediately called police.

According to the paper, the investigation showed that the wife had long been thinking of divorce and looking for a new apartment for her and the kids due to the 39-year-old man’s recurrent rages.

The man has admitted to hitting the girl and that he had been holding a shoe at the time. He claims not to remember the actual strike, as he was too angry at the time.

When questioned by police later the man also admitted that he would often yell at his kids and threaten his wife with violence but that it had never before gone this far, reported Skånskan.

The 8-year-old told the police that her father has been angry with her on at least 20 other occasions and punched things.

Although he had never before hit her, the girl said that he had often pulled her hair or ear when upset with her, according to the paper.