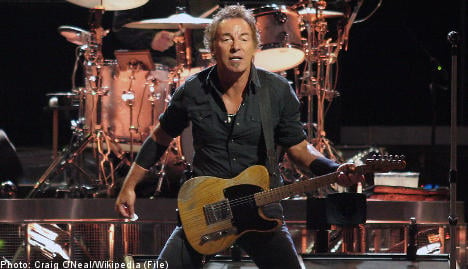 During a press conference in Paris, The Boss explained that much of the inspiration for his new album, set for release on March 6th, is anger at what he sees as the crushing of the American Dream in the wake of the 2008 financial crisis.

“I have friends who lost everything they had,” Springsteen explained, according to the Dagens Nyhter (DN) newspaper.

In 2009, he put pen to paper began writing the album’s lead track “We take care of our own”.

“In this song, I pose a number of questions. Questions which I later try to find answers to in other songs,” said Springsteen.

The 62-year-old rocker claimed the 2008 financial crisis was the result of decades of deregulation that spawned an ethic of unbridled greed.

“We’ve destroyed the idea of an equal playing field,” he said, according to the AFP news agency.

When asked if he thought the United States should be changed into something closer to a Swedish-style welfare state, Springsteen responded enthusiastically.

“Exactly! That’s my dream! It’s written between the lines. But you have to listen very closely,” he said, according to DN.

When informed that tickets for his scheduled performances in Gothenburg on July 27th and 28th sold out in less than an hour, The Boss once again expressed his solidarity with the Swedes.