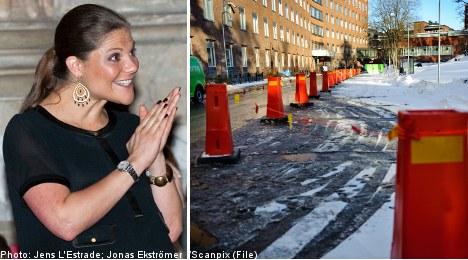 On Friday, reports emerged that Karolinska had blocked off a large number of parking spaces in order to provide space for satellite trucks and other media vehicles expected to descend on the hospital in the event that Victoria gives birth there.

“I’m all for the Royal Family, but this is ridiculous. I had to park where I’m not allowed to. Just imagine those that have to get around on crutches,” a miffed Lisbeth Thorberg told the Svenska Dagbladet (SvD) newspaper.

Thorberg was reacting to the hospital’s decision to block off a series of parking places outside Karolinska’s orthopedic ward despite the fact that it remains unclear whether or not the Crown Princess will deliver her baby at the hospital.

“This is just in case, we have no information as to whether she’s coming or not… but she might. There is a possibility and I have to prepare for that,” Karolinska spokesperson Klas Östman told The Local.

“If she does decide to have the baby here, then we will have a lot of reporters and media here, and we have to be prepared to accommodate for this.”

According to Östman, the hospital has blocked off several “strategic” parking spots so that satellite trucks won’t obstruct accessibility for ambulances and other emergency vehicles.

Östman emphasized that while they have been in touch with the Royal Court, the staff don’t know for sure whether the Crown Princess will deliver her baby at the hospital.

When contacted by The Local, a Royal Court spokesperson refused to confirm or deny whether the preparations at Karolinska were a sign that Victoria was expected to deliver her baby soon.

“We have released no information as yet, but will be in contact in due course,” the spokesperson told The Local.