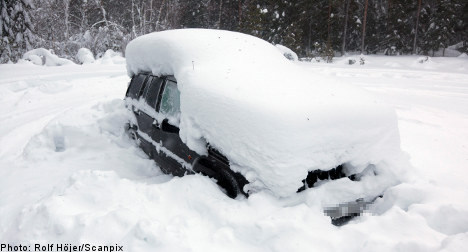 The man, named in media reports as Peter Skyllberg, hails from near Örebro in central Sweden and was discovered on Friday by a pair of passing snowmobilers who had stopped to inspect what they thought was an abandoned car in a forest trail outside of Umeå in northern Sweden.

When emergency services arrived they found a severely emaciated man who claimed to have been living in the frozen car since December without any food.

The man was immediately taken to hospital, which gave word on Sunday that he was doing well under the circumstances

Meanwhile, the seemingly impossible survival story has sparked global media attention and left many wondering not only how the man could have survived in his frozen car for two months, but also why he ended up there in the first place.

“We don’t know why he didn’t try to leave,” Nyberg told the Svenska Dagbladet (SvD) newspaper.

The man claimed he last had food on December 19th and survived by sticking his hand out the car window to grab handfuls of snow from the roof.

One source told the Aftonbladet newspaper that the man also survived on lip balm and soft drinks.

While surviving for so long under such conditions is unlikely, Stefan Branth, a doctor at Uppsala University Hospital, explained that the human body has an incredible capacity for survival.

“You can live for a month [without food]. Two months is extreme, but not impossible. But they really must have found him at the last minute,” he told the paper.

The cold temperatures may have also slowed down the man’s metabolism in what some experts call the “igloo effect”.

According to Aftonbladet the man lived a “totally normal” life until late last year when something happened that “changed the man’s life”.

“He had a girlfriend, but they broke up. And then he ran into trouble paying his bills and the rent,” a source told the newspaper, which reported the 44-year-old was 1.6 million kronor ($240,000) in debt.

The man’s father told the newspaper his son hadn’t had contact with his family in 20 years, explaining in part why he was never reported missing throughout the ordeal.

A neighbour of the 44-year-old told SvD that the man had a difficult time dealing with the break up and his economic troubles.

“The whole situation became too much for him. He just left,” the neighbour told the newspaper.

Meanwhile, local police, who were the first to be alerted of the man’s whereabouts, have stated that the event is no longer a police matter.

“There has been no crime committed as far as we are concerned; we closed the case on Friday afternoon,” Peter Jonsson of the Umeå police told The Local.

The EEA published The European city air quality viewer, an interactive tool showing the air pollution levels in 323 cities in Europe. Air pollution is the biggest environmental health risk according to the EEA.

“This city air quality viewer allows citizens to see for themselves in an easy-to-use way how their city is doing compared to others on air pollution. It provides concrete and local information which can empower citizens towards their local authorities to address the issues,” says Hans Bruyninckx, the executive director of the EEA.

The cleanest air out of all these cities can be found in northern Sweden, in the city of Umeå, which has a level of 3,7 micrograms of fine particulate matter, known as PM 2.5, per cubic metre of air.

The EEA’s classification of air quality defines four levels of air quality: “good”, “moderate”, “poor” and “very poor”, with “good air” defined as having under 10 micrograms of particulate matter per cubic meter.

Only 127 out of the 323 cities in Europe are found to pass the limit of “good air” set by both the EU and the WHO.

All of the Swedish cities included in the study – Uppsala, Stockholm, Gothenburg and Malmo as well as Umeå, had “good air” according to the report. Uppsala ranked 6th out of the 323 countries tested, while Stockholm ranked 9th, Gothenburg 23rd and Malmö 93rd.

Second and third in the EEA’s ranking are Tammerfors in Finland and Funchal in Portugal.

Despite a reduction in emissions during the Covid-19 pandemic, the remaining 196 countries were all found to have above acceptable levels of air pollution. While lower levels of commuting have led to a decrease in levels of nitrogen dioxide in the atmosphere, levels of particulate matter have remained stagnant.

The EEA’s experts said that emissions of particulate matter are the result of many different processes, including combustion of fuel for heating of homes, industry, and agriculture.

“White air quality has improved markedly over the past years, air pollution remains stubbornly high in many cities across Europe,” says Bruyninckx.

Last year, an EEA report found that Europe’s air has gotten cleaner in the last decade, but that the bad air caused 417 000 premature deaths across 41 countries in 2018 alone.

A similar study in The Lancet Planetary Health earlier this year found that air pollution causes around 200 000 premature deaths per year in Europe. They stated that if the pollution was lowered across Europe to below the limit of 10 micrograms per cubic meters, the levels recommended by the WHO, around 52 000 deaths could be avoided each year.