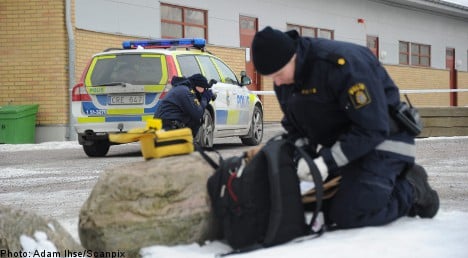 The attack, which took place on February 6th, saw the man stab a ten-year-old girl in the throat out the front of a primary school in Hjällbo, before fleeing the scene.

Police say the man then headed to another European country that he has no connection to, according to Göteborgs Posten (GP).

Although police will not reveal exactly which country the man is in, they have reported it is one governed by the Schengan agreement, and that they are now waiting for the man to be extradited to Sweden.

The man confessed to the crime after turning himself in. He reportedly has no relation to the girl, and told police he was not acting on behalf of someone else in the attack.

It is assumed that the man will be extradited to Sweden in the following weeks.

“Yes, that is my hope. All the documents are in place now, so it shouldn’t take so long,” said prosecutor Per Håkan Larsson.

The girl is reportedly doing well after the incident, in which a knife was stabbed into her neck, which was not removed until she reached hospital.

Despite a minor infection in the stab wound, the girl has recovered from her injuries, and is reportedly angry with the man, claiming she wants to “kick him”, according to GP.

A relative of the girl was not so easy on him:

“I am afraid he will just got to psychiatric care for a few months and be out again. He’ll surely do the same thing again, he’s a dangerous man”.