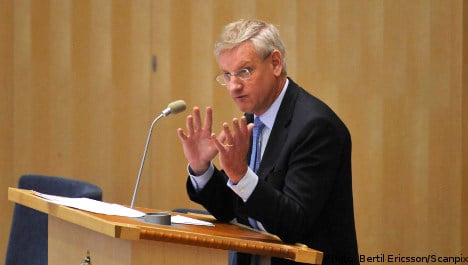 The details are included in a September 2009 email exchange between employees of Strategic Forecasting, Inc., a US security consulting company commonly known as Stratfor and are attributed to a Swedish member of the European Parliament referred to only as “SW501”.

According to the report, SW501 is a “very well connected” Swedish MEP with “extremely close links” to Bildt.

In addition, the report claims that Bildt has a “very rocky” relationship with Swedish prime minister Fredrik Reinfeldt dating back to the days when Bildt was prime minister and Reinfeldt was head of the Moderate Party’s youth organization.

According to the Stratfor report, Bildt is also “very critical” of Russia, having at one point called Putin a “chetnik”, a term used to refer to ultra-nationalist Serbs.

Bildt was reportedly also “at odds” with French president Nicolas Sarkozy over a dispute over French maneuvering related to Sweden’s presidency of the EU in 2009.

The unnamed Swedish MEP explained as well that Sweden views EU enlargement as a way to “break the German-Frenc [sic] stranglehold on the EU”, according to the Stratfor report.

Bildt’s work on the Balkans prompted him to conclude that “he does not like Croats and Albanians,” according to the report.

Bildt spokesperson Anna Charlotta Johansson told The Local referred to the details in the emails as “hearsay”.

“I think we’ll do what we normally do in these circumstances which is refrain from commenting. This is information from a third part,” she told The Local on Monday.

In addition to an array of alleged foreign policy insights, the email also included several personal details about Bildt, including how tall he is, his alleged brain power and the fact that his wife Anna Maria Corazza Bildt is “apparently Italian and does not speak really good Swedish

Later on Monday, Bildt used his official Twitter account to brush off the significance of the email.

The email exchange is one of an estimated five million Stratfor emails released by WikiLeaks on Monday in what the whisteblower website is calling “The Global Intelligence Files”.

The emails are dated between July 2004 and December 2011 and, according to WikiLeaks, “reveal the inner workings” of the Texas-headquartered global intelligence firm, which provides analytic reports to a number of major corporations and US government agencies.

The release comes just days after Swedish tabloid Expressen reported that WikiLeaks was planning a “smear campaign” against Sweden in an attempt to prevent the country from eventually extraditing founder Julian Assange to the United States.

Assange is currently in the UK in the last throes of an extended legal battle to avoid extradition to Sweden to face questioning over sex crimes allegations.