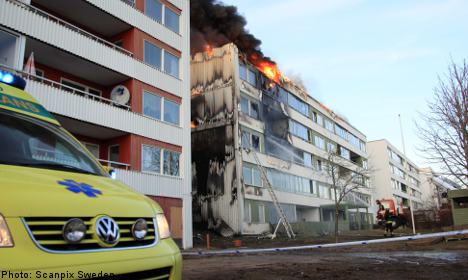 Oscar and a young friend were standing outside the apartment building in Mjölby, southern Sweden, on Saturday when they noticed flames and black smoke billowing from the building.

The boy immediately called 112, the emergency service hotline in Sweden, to alert authorities of the fire.

“They didn’t believe us and told us we should stop. They thought we were prank calling,” the boy told daily Aftonbladet.

However, Oscar made another call a few minutes later, and allegedly was answered by someone else, who took the call seriously.

Norrköping’s SOS Alarm spokesperson has refused to comment on the event.

Stefan Rylander of the Mjölby fire services said that the fire truck was deployed after receiving an emergency call at 3.42pm, and that they were on the scene in three and a half minutes, wrote the paper.

The fire claimed the life of a 5-year-old, who tried to hide under a bed as the flames spread throughout the building. She was pronounced dead by police at 5.44pm.

An investigation was launched, after officials were concerned with the speed at which the fire spread. Foul play has not been ruled out, and officials are also questioning whether the structure of the building itself may be to blame.

The extensive use of plastic foam, used for insulation, may have been a reason for the speed in which the fire engulfed the apartment building.

“While this type of foam has been around for a long time, during the last ten-fifteen years it’s been used in a different way, in larger quantities and in places where it is exposed. Foam can, in some situations, pose fire problems,” said Mattias Strömgren of the Swedish civil contingencies agency to Dagens Nyheter.