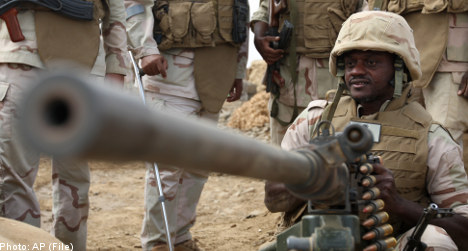 “Through their actions Sweden is letting down both the democratic and liberal forces in Saudi Arabia and the west that have been fighting for human rights for years,” said Madawi al-Rasheed, a political activist and daughter of the founder of the Saudi Democratic Front, to Sveriges Radio (SR).

Following Tuesday’s revelations, first reported by SR, the Swedish government has been forced to answer a storm of criticism regarding Sweden’s involvement in the project.

“I think it is incomprehensible that we have a government which helps a dictatorship to develop weapons systems and build an arms factory behind the back of the Swedish Riksdag,” said Jonas Sjöstedt, Left Party leader, to SR.

The Left Party will demand a Riksdag debate on the matter, according to the broadcaster.

However, among the parties in the ruling centre-right Alliance government, the stance is that the deal was struck under the previous Social Democrat government and signed by then-minister of defence Leni Björklund in 2005.

“This was a deal that the Social Democrat government formed with the Saudis in 2005 and we were already highly critical of it back then. We don’t think Sweden should close military deals with Saudi Arabia, which is one of the world’s fiercest dictatorships,” said Christian Democrat leader Göran Hägglund to daily Expressen.

The Liberals (Folkpartiet) have also criticized the project, with party leader Jan Björklund telling SR that the cooperation is a direct consequence of the deal that was struck between the Saudis and the Swedes in 2005.

And the party’s spokesperson on foreign affairs, Allan Widman, said the party has been critical of the cooperation from the very beginning.

“I reported Leni Björklund to the Committee on the Constitution (Konstitutionsutskottet, KU) in 2005 for entering this agreement so I have been against it from the very start,” Widman told Expressen.

However, the Social Democrats contend that the current Alliance government are responsible for the secret arms deal.

“The government had the opportunity to call off the cooperation in 2010, but chose to continue. This project that SR has detailed was initiated in 2007, during the centre-right government’s time in office. So everyone can see that it has happened during the current government’s time,” said Urban Ahlin, Social Democrat spokesperson on foreign affairs, to SR.

On Wednesday new documents were made public indicating that another government agency, the Swedish Agency for Non-proliferation and Export Controls (Inspektionen för strategiska produkter, ISP), was also involved in the project.

Minutes from a 2008 meeting reviewed by SR show that ISP chair Andreas Ekman Duse participates in a meeting between FOI and the Saudi general Nasser at the ministry of defence.

However, Ekman Duse doesn’t think this puts him in a compromising situation.

“I was called there by the ministry of defence and took part in this meeting on their behest to explain how Swedish export controls work. It had nothing to do with the deal itself,” he told SR.

Prime minister Fredrik Reinfeldt said on Wednesday that the government expects its agencies to follow rules and regulations and assume that they do until otherwise is proven.

“I can understand that there are questions about the information that has come to light. But I have learned from experience to wait until we really know who has done what before we are ready to decide if someone has broken a rule and what consequences this should have,” Reinfeldt said to TT, adding that he welcomes the potential investigation by the Riksdag’s Committee on the Constitution.