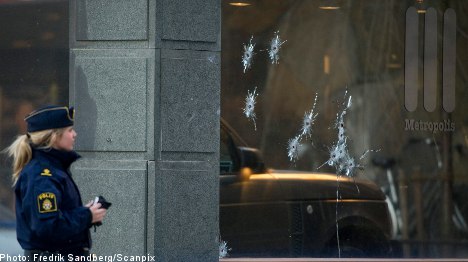 A total of 16 shots were fired in the incident, with all the bullets coming from guns fired by the police.

At first it was believed that the March 6th shootout in Stockholm’s upscale Östermalm district was a reaction by police when the criminals opened fire.

A subsequent investigation has revealed, however, that the robbers never fired any shots, and it is in fact unknown if they were even in possession of any weapons.

“If the data is correct, one or more police officers behaved like American cowboys. This is extremely serious,” said criminologist Jerzy Sarnecki to Metro newspaper.

“Even if police officers have perceived the situation as extremely dangerous they still can’t just shoot this way. It simply cannot occur.”

Sarnecki continued to point out that such an incident raises further questions about the competence of the Swedish police force.

“What sort of police force do we have in this country? What sort of instructions do they get? Does the training and leadership work?” he said to the paper.

Ten of the shots fired by police went directly through the window of a nearby gym, coming dangerously close to injuring people who were training at the time. No one was injured, however.

The revelations about police officers being the only ones firing shots came during an Sveriges Television (SVT) interview with prosecutor Katarina Bergström.

When consulted whether this was a necessary action, Bergström hinted the officers’ actions may not have been warranted.

“I have no information saying that they should have,” she told SVT.

After the shootout, three men were arrested by police.

The police have since launched an investigation into the matter.