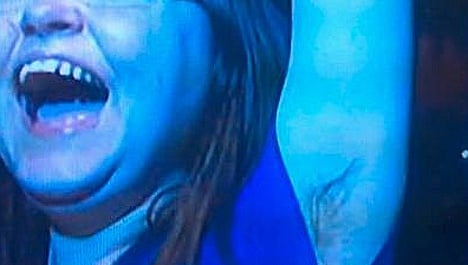 The incident took place shortly after Swedish singer Loreen had been announced as the artist who would represent Sweden at the Eurovision Song Contest finals later this spring.

One avid Facebook user in Sweden managed to take a screenshot of the woman, which he posted online – an image which then spread like wildfire across the site.

Within hours, thousands of people had “liked” the image, and hundreds had shared the image on their own Facebook pages, with an overwhelming number of crass and bullying comments attached.

Daily Aftonbladet even ran a story “Sweden’s most famous unshaved armpit” which sparked people’s interest even further, and prompted Lina Ehrin to come forward as the armpit’s owner.

Ehrin, a 32-year-old librarian from Ludvika, central Sweden, has shot from oblivion to nationwide fame overnight – and can’t understand why.

“This is absurd, very absurd,” she told The Local.

“I mean, there are wars going on in the world, yet crazy people are sitting here commenting on this.”

However, the bullying has not succeeded in fazing Ehrin, who claims she is too old to be affected by people who sit at home and write comments.

“Everything is so fast on the internet, people don’t think they can hurt people but then can. I’m fine, but I’m also glad I’m older, if I were 15 I would be really hurt right now,” she said.

“I can’t believe a little bit of hair on a woman is such a big thing, especially not after it was International Women’s Day last week,” she said.

One of Sweden’s most prominent bloggers, Hanna Fridén, a self-described feminist, took issue with the reaction of the Swedish public.

“Most people aim to bully. With words like that she is disgusting. Retarded. Should be ashamed. That she was embarrassing. Some aimed to defend her, but the majority bullied,” wrote Fridén on her blog.

“It’s disgusting when people write these things, just because she’s going against the standard appearance. She has chosen not to shave under her arms and people are incredibly provoked by it.”

“The fact that the image includes her face makes it even worse. She has not chosen this. It’s extremely problematic and bullying.”

Since the online storm, the original posting and all its comments have been removed from the internet.

Meanwhile, a pro-hair group continues to soar in popularity, with armpit-hair enthusiasts having started their own Facebook event to stand up for non-shaving and share images of themselves proudly showing their own hirsute pits.

In the description of the group, “Ta håret tillbaka!” (‘Reclaim the hair), administrators have expressed the positive body image goal of the group.

“We decide ourselves how our bodies look. Fight against net-hate and net-bullying. Love conquers hate,” they write.

The online event organized by the hair-happy Facebookers has already attracted 6,000 people, with many more thousands invited.

When told of this, Ehrin chuckles.

“Well, that’s nice to hear. Maybe we can turn it into a positive thing. Maybe this will get people in Sweden to think,” she told The Local.