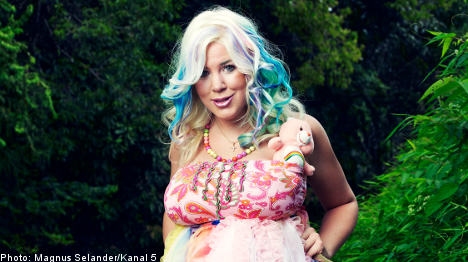 The show sees the women dropped “in the middle of the jungle” where they are faced with a variety of challenges as they fight to “find their way back to civilization”.

But one of the show’s challenges, a wild mud wrestling contest, proved too rough for Hellqvist’s sizeable breasts, as the silicone implant in her right breast came loose during the course of the competition.

“It was totally insane. It just burst,” she told the Expressen newspaper.

“The other girls were also worried and wondered what was wrong. It was really unpleasant.”

Following the incident, which took place during filming the show several months ago, the production team decided to send Hellqvist to hospital as a precaution.

She is currently in Sweden awaiting an operation to have the rogue implant put back in place.

“It feels really bumpy and bubbly,” she told the paper.

The breast implant mishap wasn’t the only aspect of the show that left Hellqvist unsettled.

“It was hard to wake up in the jungle. There were annoying animals everywhere,” she said.

During the programme’s ten episodes, the first of which aired Wednesday night, viewers will also be able to see the contestants use hairspray to start fires and try to get their hair straighteners started without electricity.