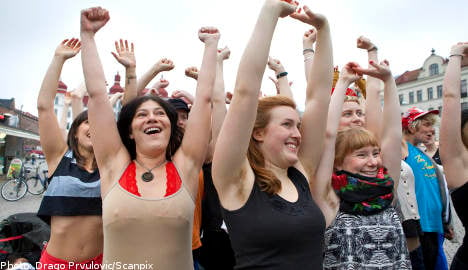 “We want to take a stand for all those that are insulted. It is about gender roles and letting everyone be themselves,” said Anni Isis, one of the armpit baring protesters, to the local Sydsvenskan paper.

The demonstration was organized by the Malmö Feminist Network (Malmös Feministiska Nätverk), which decided to “Reclaim the Hair” after Sweden’s online community had been whipped into a frenzy due to one woman’s hairy armpit being exposed during a live television broadcast of the Melodifestivalen song contest finals on Saturday.

Lena Ehrin from Ludvika in central Sweden was cheering the Swedish Eurovision candidate Loreen when her clearly visible underarm hair appeared momentarily on live TV and in the living rooms of an estimated 4.1 million Swedish television viewers.

A Facebook user then managed to take a screenshot of Ehrin’s hair, which he posted online – an image which then spread like wildfire across the site.

Within hours, thousands of people had “liked” the image, and hundreds had shared the image on their own Facebook pages, with an overwhelming number of crass and bullying comments attached.

“It is proof that many live in a narrow-minded and normative world. We have to challenge these structures,” said Isis to the paper.

All the women gathered in Malmö on Thursday had reacted to the massive online outcry that erupted against the woman and her hairy armpit.

“We need to show that this is a form of oppression based on a beauty norm and controlling the female body,” said Anna Gagliardo to local paper Skånskan’s web TV.

Following the furore, Emma Lundberg decided to post a picture of her unshorn underarm region on Facebook. According to her, what was done as a joke has later had mixed reactions.

“I have received death threats online many times. They say we are unhygienic and often call us whores,” she said to Sydsvenskan.